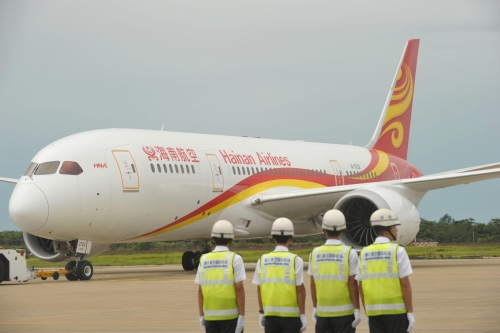 Hainan Airlines started flying its new B787 on the Beijing–Haikou route from July 11th.
The airline, which took delivery of its first Dreamliner earlier this week, will also operate the aircraft type domestically between Beijing and Shanghai. In October it plans to roll the Dreamliners out on some North American routes including Beijing-Chicago, Beijing-Seattle and Beijing-Toronto.

In a statement the airline said it believed flying the aircraft on the Beijing-Haikou would “spark a tourism boom between Hainan and Beijing during the summer travel peak season”.

Hainan becomes the second Chinese airline, after China Southern, to take delivery of a Dreamliner.

"Hainan Airlines’ first 787 Dreamliner will take its first commercial maiden voyage on July 11. The most important mission of this flight is for the airline to achieve its dream plan and realize that dream through the 787 Dreamliner, while providing a safe and comfortable onboard experience for each traveler achieving their own personal dream by being on the flight," Hainan Airlines president Liu Lu said.

SOURCE: routes-news.com
Editorial Message
This site contains materials from other clearly stated media sources for the purpose of discussion stimulation and content enrichment among our members only.
whatsonsanya.com does not necessarily endorse their views or the accuracy of their content. For copyright infringement issues please contact editor@whatsonsanya.com

Next news: Surfing and SUP course held at Dadonghai