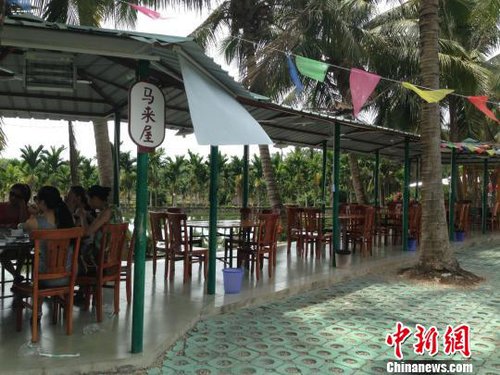 "Most returned overseas Chinese are hard-working and fearless. Back in the 1950s, we worked hard together to develop wastelands into arable farmland," said Wu. "The key to our success is industriousness."

When Hainan Province was officially established in 1988 with the launch of the Hainan Special Economic Zone, the largest special economic zone in China, Wu grasped what she saw as a business opportunity and opened a hotel in town. After years of running the profitable business, she set her sights on developing an agritainment business at the Xinglong Overseas Chinese Farm to meet the increasing needs of the island’s growing tourism industry. In 2010, the Chinese government said that it aims to turn the island into a top international tourism destination by 2020.

Despite her age, Wu personally participated in the construction work of the farm and enlisted the help of her relatives in the mainland of China and Indonesia to manage the new business.

Wu’s farm is now one of the largest farms in Xinglong and she has many new plans for the future.

"I will build some fountains around the farm to make it an even more pleasant environment for the tourists to stay in," said Wu. "I always plan things that I really love."

Since it was established in 1951, the Xinglong Overseas Chinese Farm has seen over 13,000 returned overseas Chinese from 21 countries and regions, including Thailand, Malaysia and Vietnam, settling there. At various stages in time it has been a collective farm village, state farm, people’s commune, and production and construction corps.

The flourishing tourism industry in Hainan in recent years has also benefited the development of the Xinglong Overseas Chinese Farm, with its annual value having reached more than 100 million yuan (US$ 16.3 million) recently.

Next news: 5 suspects detained for selling 5,600 ‘brand-name’ cigarettes in Sanya