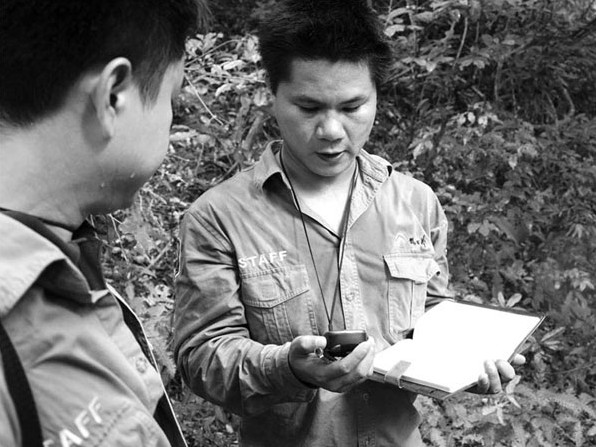 Youngsters conduct research and collect data in the 50,464-hectare natural reserve in central Hainan. Huang Yiming / China Daily
When Wang Hesheng came to the Yinggeling Nature Reserve in 2007, it was love at first sight, he said.

"If you love the rainforest, you will find it full of surprises," Wang said.

Despite the rather rough living conditions there, it was quite appealing to Wang, who was a fresh postgraduate in entomology from Yunnan University at the time.

In the untamed forest, there was no electricity and no telephone-not even roads. The offices of Wang and his colleagues were two private houses that would serve as dormitories at night.

But the nature reserve’s rich research resources are what convinced him to stay.

In 2008, on an expedition along the tributary of the Changhua River, he became the first person to find a peach blossom jellyfish in Hainan province.

An endangered species, the freshwater jellyfish is often compared to pandas in terms of rarity.

Later that year, Wang discovered groups of migratory butterflies in the valley that had come to the province for the winter.

"After three years of monitoring, we found that these butterflies would come here in October and November and leave in February and March," Wang said.

Now, Wang and his colleagues have identified more than 10 spots at which these butterflies gather each year.

Another focus of the reserve’s research team is on the Yinggeling tree frog, which was discovered and named in 2003 by Chen Beile, deputy director of the reserve.

After obtaining funds from the State Forestry Administration in 2010, they began conducting extensive studies on the tree frog, including its population and reproductive habits, and published two SCI papers on the species. The report is only a tiny part of their work, he said.

For the past six years, the team has established a digital reserve, set up an electronic database of animals and plants found in the reserve, identified 20 new species and published more than 40 papers.

Mi Hongxu is the latest addition to the team.

A postgraduate in zoology, he came to the reserve in 2012.

A native of Harbin in Northeast China’s Heilongjiang province, Mi said if one chooses a job one likes, he or she will realize its value and understand the importance of his own role. That is also the attitude of the whole team, he said.