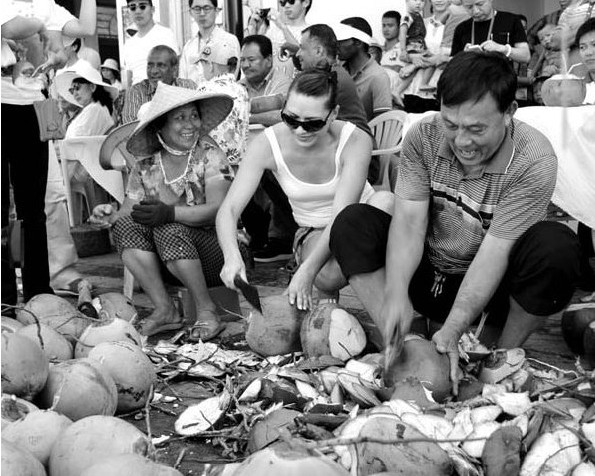 A foreign diplomat enjoys a stay in Qionghai, a city with fresh air and green environment. Zeng Yuqing / China Daily
The island province of Hainan saw marked improvements to its environment in 2012, according to an official report.

For 351 days out of last year, China’s southernmost province achieved the country’s highest class of air quality, according to the 2012 environment quality monitoring report released by the Provincial Department of Land Environment and Resources in early June.

As part of its campaign to bolster environmental protection, the government revoked business licenses of 57 plants with outdated production facilities and handled 175 cases involving illegal sewage discharge in 2012. Official statistics show that Hainan’s sulfur dioxide emissions in 2012 were 34,000 tons, a 3 percent decrease year-on-year, and smog emissions stood at 15,000 tons, a drop of 6.3 percent from 2011.

The report also covered water quality, forest coverage and eco-villages in the province.

Eighteen cities and counties reported good water quality, and another 25 reached or exceeded the third-class water level in 2012.

The province’s campaign to increase green space on the island also bore fruit.

Also, 1,187 hectares of land along the province’s highways were planted with grass and trees, and more than 2 million seedlings were cultivated over the year.

The government has also made efforts to improve the living environment for local residents, according to the report.

By the end of the year, the number of eco-villages in the province had grown to 13,660, accounting for 58.6 percent of the total on the island.

According to the report, local authorities have been improving their monitoring capacity in recent years.