Hainan Airlines says no body odor for its aircrews 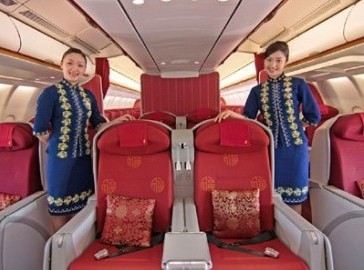 Hainan Airlines wants good smelling employees only.
When flying on an airplane while being served by the crew, nobody wants to smell their sweat, therefore one airline has a policy to smell the armpits of potential employees to make sure they are odor free.

Hainan Airlines required its airline crew to look good and smell good. Each crew member has to be free of body odor or sweat. The airline generated controversy after apparently having a zero tolerance policy for body odor when hiring aircrew.

When one applies for the aircrew job at the airline, they are called in for an interview. At the interview one of the airline staff will go very close to the potential employee to smell their armpits. Company officials say the airline staff interact with the public and passengers do not want to deal with a person’s body odor during a special trip.

“Our staff works closely with the public, and no traveler wants to smell the armpits of a crew member,” an airline spokesperson said. One applicant who was rejected for his smelly armpits said: “I passed everything, but I was doomed because they did not like the smell of my armpits. That’s just crazy.”

The company also claims that the smell test is a good indicator of stress management. The same airline spokesperson said: “If you are able to stay calm in this test, you are not going to sweat in the cabin.”

SOURCE: spyghana.com
Editorial Message
This site contains materials from other clearly stated media sources for the purpose of discussion stimulation and content enrichment among our members only.
whatsonsanya.com does not necessarily endorse their views or the accuracy of their content. For copyright infringement issues please contact editor@whatsonsanya.com