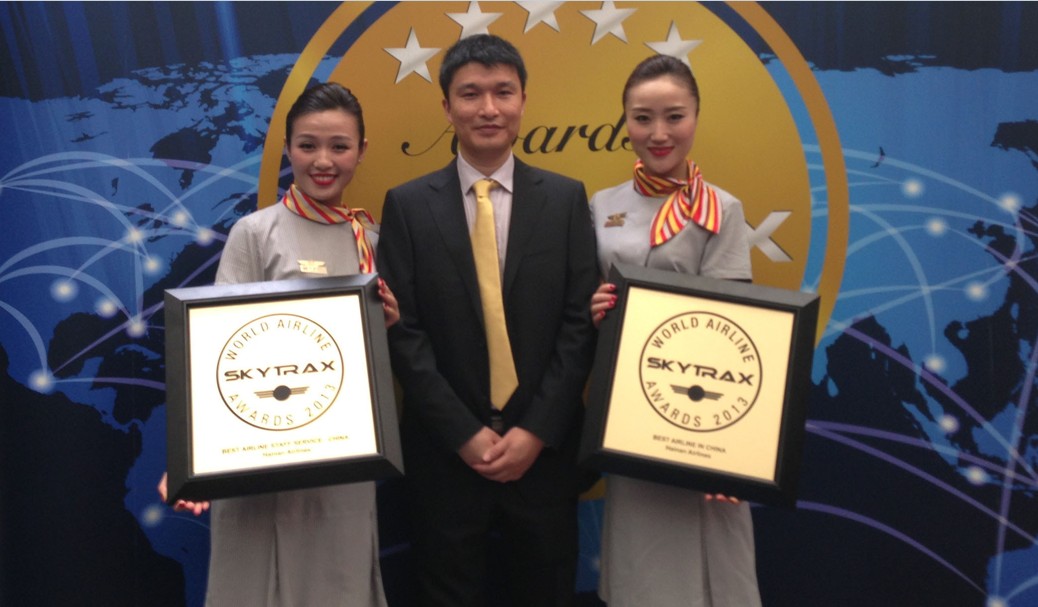 SKYTRAX, a global provider of professional aviation evaluation services, announced the winners of "2013 World Airline Awards" at the 2013 Paris Air Show held in Paris, France on June 18th. Executives from around the world assembled at the World Airline Awards to receive their accolades, which were handed out by SKYTRAX chairman Edward Plaisted. Winners of all the awards, including "World’s Best Airlines", are selected by 18 million air travelers from over 160 countries worldwide.

In presenting the awards to Hainan Airlines vice president Xie Haoming, the SKYTRAX chairman expressed his congratulations to the carrier. Xie Haoming said that with the high level of responsibility that SKYTRAX has entrusted in the airline, Hainan Airlines will continue to maintain the high standards of a five-star airline. In line with traditional oriental hospitality, Hainan Airlines remains committed to providing global travelers with comfort and convenience both on the ground and in the air with its new fleet, a comprehensive route network and excellent in-flight services, while moving towards its goals and continuing to build Hainan Airlines into an international brand as the "Beauty of the Orient".

With the celebration of its 20th anniversary since inception this year, Hainan Airlines has successfully and rapidly made the transformation from a local airline into an international five-star carrier. In 2012, its fleet of 120 aircraft transported 23 million passengers over 500 domestic and international routes. In April of 2013, the company was honored as the "SKYTRAX Five-Star Airline" for the third straight year for the excellence of its services. At the end of this June, the Boeing 787 Dreamliner featuring 213 spacious and comfortable 180-degree flat-bed seats, will officially become a part of its fleet. The aircraft is expected to draw attention from all around the world for its excellent performance, innovative design and low carbon utilization. From early July, the 787s are scheduled to first serve select high-quality routes, including Beijing-Haikou and Beijing-Shanghai. Passengers traveling these domestic routes will have an opportunity to become acquainted with the 787. Later, the 787s are slated to operate on some North American international routes, including Beijing-Chicago, Beijing-Seattle, and Beijing-Toronto, offering an unprecedented five-star experience for world travelers.

Hainan Airlines was noted for its good services, with a focus on establishing a complete service system and differentiating unique offerings, while paying special attention to customer requirements and service details. Most recently, the airline launched its new slogan, "Cherished Experience", and new brand image "The Beauty of the Orient", expressing Hainan Airlines’ cherishing of its relationship with each and every passenger and its goal of creating a service standard and brand concept that delivers a perfect airborne voyage for world travelers that choose to fly with Hainan.

Skytrax, a research organization for the aviation industry based in London, UK, is a leading professional quality-rating provider in the global aviation and airport industries. With its star ratings system for airlines worldwide at the core of its business, Skytrax is renowned worldwide for its airline and airport audit and quality benchmarking. The organization annually publishes reports on rankings of airlines and airports globally, which are well recognized by the industry and by passengers. Today there are only 7 five-star airlines worldwide: Singapore Airlines, Qatar Airways, Malaysia Airlines, Cathay Pacific, Asiana Airlines, Hainan Airlines and ANA.

The biennial Paris Air Show ("International Paris Air Show") is one of the world’s largest and most prestigious international aerospace exhibitions, with a history of 102 years. The 2013 Paris Air Show will take place at Le Bourget airport located northeast of Paris, where a wide range of R&D outcomes, advanced technologies, the latest materials, complex aircraft and spacecraft designs as well as inspection technologies in the aerospace industry will be showcased.

SOURCE: prnewswire.com
Editorial Message
This site contains materials from other clearly stated media sources for the purpose of discussion stimulation and content enrichment among our members only.
whatsonsanya.com does not necessarily endorse their views or the accuracy of their content. For copyright infringement issues please contact editor@whatsonsanya.com