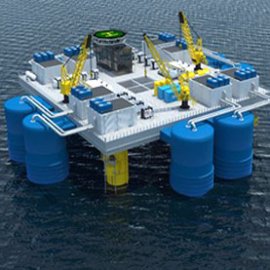 An artist’s conception of a pilot plant off China’s coast that will supply a resort with electricity generated from differences in ocean temperatures. Image Credit: Lockheed Martin
Lockheed Martin have been working for forty years on harnessing energy from the massive temperature differentials in the ocean, and thanks to a partnership between the US defense and aerospace giant and a Chinese resort developer, a 10-megawatt power plant using ocean thermal energy conversion (OTEC) will be built off southern China’s Hainan Island.

The agreement has been signed between Lockheed Martin and the Beijing-based Reignwood Group and will hopefully see the power plant completed by 2017. The power plant will provide 100% of the power necessary to run the resort, which will be marked as a low-carbon real estate development.

As one of our readers clarifies: “OTEC uses warm surface water to vaporize a fluid with a low boiling point, typically ammonia or propane, and pumps cooler water from depths of up to 1000 meters below the surface to re-condense the fluid. The movement of the liquid through the system is enough to continually power a turbo-generator. The simplistic nature of the station, which behaves almost like a gigantic internal combustion engine, allows OTEC power plants to be largely self-sufficient. And unlike wind and solar energy, which have a fluctuating output that changes according to the weather and the time of day, the regularity of ocean temperatures and movements provide a far more stable and consistent source of power. ”

Lockheed has been testing the technology for several years at a site in Hawai’i in partnership with Makai Ocean Engineering, the Energy Department and the US Navy, however several obstacles kept the idea from growing into a full-scaled power plant, according to sources familiar with the testing program.

While Lockheed Martin moves on to develop with the Reignwood Group, Makai Ocean Engineering will continue its partnership with the US Navy. According to Duke Hartman, a spokesperson for Makai Ocean Engineering, the Pentagon has retained its goal of developing a 5 to 10 MW pilot plant off the island of Oahu, and hope to eventually create a commercial plant of up to 100 MW.

“The Navy wants a thriving OTEC industry because they would benefit from it,” Hartman said. Imagine being able to tow a semisubmersible power plant to almost any corner of the world, he added.

While Lockheed have had to look internationally for partners to further develop OTEC technology, Dan Heller, Lockheed Martin’s vice president of new ventures for Mission Systems and Training, has noted that there are several sites in the US that have demonstrated potential for commercial OTEC Plants, including Hawai’i and Florida.

SOURCE: cleantechnica.com
Editorial Message
This site contains materials from other clearly stated media sources for the purpose of discussion stimulation and content enrichment among our members only.
whatsonsanya.com does not necessarily endorse their views or the accuracy of their content. For copyright infringement issues please contact editor@whatsonsanya.com

Next news: China Jiuhao Health Town to commence operation in Sanya in 2016