Hainan Airlines to get its Dreamliner by end of June 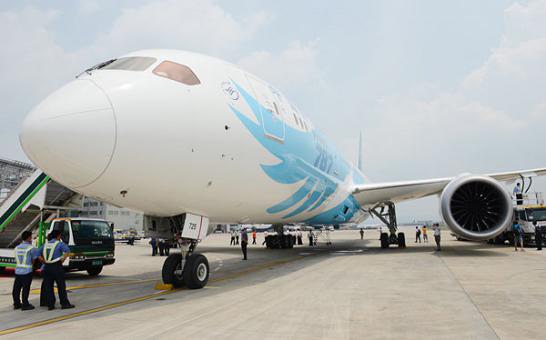 A China Southern Airlines’ Boeing 787 Dreamliner parks at Guangzhou Baiyun International Airport on Sunday. The plane arrived in Guangzhou from Seattle, the headquarters of The Boeing Company. Lin Yuding / For China Daily
Chinese airlines’ first Boeing 787 Dreamliner jetliner arrived at Guangzhou on Sunday, almost five years behind schedule amid production delays – including an international grounding of the planes earlier this year after two battery fires.

China Southern Airlines Co Ltd, the largest airline in China by fleet size, is the first Chinese carrier and 10th in the world to use the 787 Dreamliner.

China Southern ordered 10 Dreamliners, eight of which will be delivered by the end of 2013, said Tan Wangeng, general manager of China Southern Air Holding Co.

"All 10 new aircraft are slated for delivery to our fleet by the close of 2014," he added.

The first Dreamliner will get three days of test flights before being put into service on the airline’s Guangzhou-to-Beijing route on Thursday.

The carrier also plans to fly its Dreamliner fleet from Guangzhou to international destinations – including Paris, Vancouver, London and Auckland, New Zealand – after the aircraft and air crews are prepared for long-haul routes, Tan said.

The Dreamliner, with about 250 seats, uses new, fuel-efficient engines, and 50 percent of the craft is made of composite material, reducing the weight of the jetliner and adding to its fuel efficiency.

The aircraft is suitable for long-distance routes, and Boeing Co predicts that about 700 aircraft will be sold in China for that purpose over the next 20 years.

China Southern now is the world’s only airline with both the Dreamliner and Airbus SAS’ A380, the world’s largest jetliner.

The carrier pins its hope on the two advanced aircraft to grow on the international market, but some aviation analysts suggested the carrier should make a choice.

China Southern already uses the A380 on its Guangzhou-to-Los-Angeles route, but the new aircraft may be more suitable for that flight, said Su Baoliang, an analyst at CITIC Securities.

"The Boeing 787 is definitely a better choice for the carrier on the route from Guangzhou," Su said.

Su said the Dreamliner, with fewer seats, can meet the demand of non-hub airports, and the A380 is too large for Guangzhou’s.

The superjumbo can be profitable in the hub airports with a huge passenger flow, such as Beijing and Paris, but China Southern would have difficulty entering those markets, he said.

China Southern is negotiating with Air China Co Ltd on using an A380 on the Beijing-to-Paris route. Those talks haven’t yet yielded a deal.

Meanwhile, other Chinese airlines waiting for the Dreamliner are also preparing routes for their jetliners.

Hainan Airlines Co Ltd, the fourth-largest airline in China, also will get its Dreamliner by the end of June, Boeing China President Marc Allen said.

The carrier made 10 orders and plans to put the aircraft on its Beijing-to-Chicago route, which will be launched in September.

The Dreamliner had 41 orders in China from four airlines by the end of 2012, although some Chinese airlines switched their orders to other airplanes due to the delivery delays.

The US aircraft manufacturer delivered the first Dreamliner in September 2011 to All Nippon Airways Co Ltd, the largest airline of Japan, after a delay of three years.

The aircraft was grounded globally in January after a lithium-ion battery caught fire in an empty, parked Dreamliner in Boston, and after smoke from the same type of battery led to an emergency landing of another Dreamliner in Japan. Boeing announced in April that the battery problem had been fixed.

Boeing plans to improve the production rate of the new jetliner to 10 per month by the end of 2013.

SOURCE: people.com.cn
Editorial Message
This site contains materials from other clearly stated media sources for the purpose of discussion stimulation and content enrichment among our members only.
whatsonsanya.com does not necessarily endorse their views or the accuracy of their content. For copyright infringement issues please contact editor@whatsonsanya.com