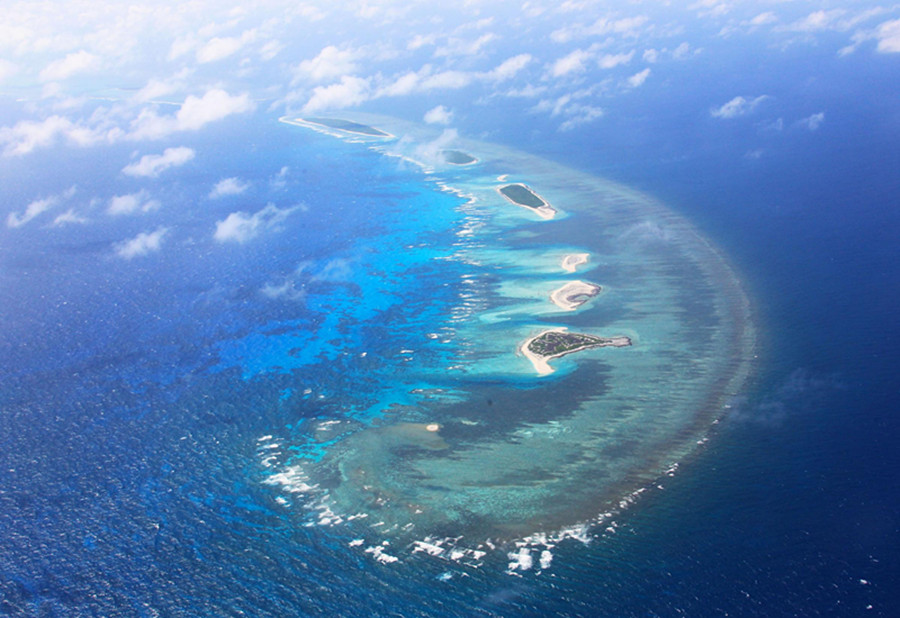 Located five miles Southwest of Yong Xing Island, Qilianyu consists of seven small islands that sit comfortably on the ocean. [Photo/Xinhua]
Sansha, which happens to be the most southern city in terms of geographic location in longitude and latitude, was established on July 24, 2012 and is comprised of the Spratly and Paracel Islands along with the Macclesfield Bank. With a total area of 13 square kilometers and a maritime area of 2.60 million square kilometers, it is the smallest prefecture-level city in terms of both population and land area, but also the largest in terms of water area.

Yongxing (Woody) Island is the location of Sansha’s government which was established on July 24, 2012. It is the largest of the Paracel Islands in the South China Sea. The island is an accumulation of coral and shell sand, and serves as the political, military and culture center of Sansha.

Since Sansha was first established, great changes have occurred on Woody Island. Living facilities have been built along with official buildings, banks, libraries, an observatory, hotels, hospitals and other important buildings. And mobile communication signals now cover all of Xisha Island.

Roads have been built which circle the entire island, and there’s also an airport with a runway that is 2.4 kilometers long, big enough to accommodate a Boeing 737. The island also has three docking ports capable of berthing vessels up to 5,000 tons.

On the eve of Sansha’s first anniversary, a correspondent landed on the island and recorded the new appearance of the city at sea. By flying over the city, the correspondent was provided with a bird’s-eye view of the whole area consisting of the small isolated islands and shoals which resemble lotus flowers dotting the blue ocean water.

Next news: China Southern Airlines to receive first Boeing 787 on 31st May, 2013