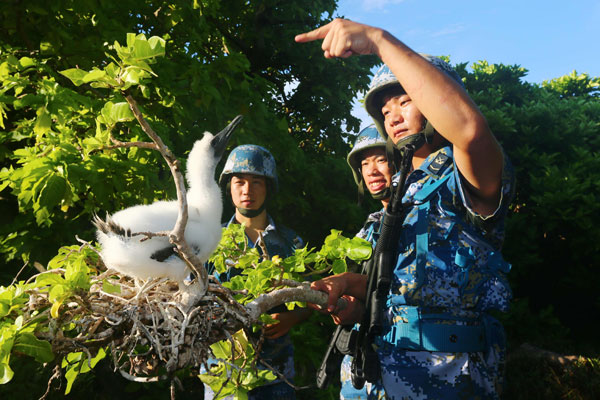 Navy soldiers stationed on East Island, the second largest of the Xisha Islands, play with a white gannet, a protected species, on Saturday. More than 40 species of birds live on East Island, known as "the island of the birds". Zha Chunming / Xinhua
Cruises to the Xisha Islands in the South China Sea began to sell at major travel agencies following a successful maiden voyage last month.

The political significance is much bigger than the economic benefits that the cruises will bring tour operators, industry specialists said.

Some 100 Chinese tourists embarked on a four-day voyage to Xisha on the Coconut Princess, the only cruise ship allowed to sail there, on April 28.

Another sailing is set to take place on Friday, with some 150 passengers.

The islands, including Dongsha, Nansha and Zhongsha, are located 330 kilometers southeast of South China’s Hainan province.

"Cruises are likely to be the main choice for tourists to Xisha as they minimize damage to the environment," said He Yong, general manger of Ctrip’s tourism business department.

The cruise will depart once or twice a month.

"We haven’t received too many people signing up yet mainly because it’s brand new," He said.

However, some travel agencies are not sure about the economics.

Dong Liang, a spokesman for China Youth Travel Service said that the price is too high compared to routes to Japan or the Republic of Korea.

Peng Yueting, who works at Hainan Ananda International Travel Service and is in charge of the company’s cruise sales to Xisha, said some tourists from the maiden voyage complained about limited resources.

Without any hotel on the island, cruise-goers have to eat and sleep on board the ship rather than staying overnight on the island.

Drinking water is transported from Hainan by supply boats and electricity produced by diesel generators.

"Another problem is we can’t tell tourists how many seats are available, as Coconut Princess isn’t a full-time entertainment cruise ship. It also needs to carry workers to Xisha, and the local government may request travel agencies to withdraw passengers at the last minute as more workers need to go to the islands," she said.

In addition, there are special requirements.

Only mainland tourists aged between 18 to 60 in "good health, which includes normal weight, no history of heart disease or hypertension" are allowed. Foreigners are not permitted on board.

"A product like this is not suitable for promotion by a travel agency," said Yang Yanfeng, associate researcher with China Tourism Academy.

Yang said sailing to Xisha was a bit like paying a visit to Taiwan.

Ningbo native Fu Jinfang, 50, paid nearly 10,000 yuan for Friday’s trip to Xisha, including return flight between Zhejiang and Hainan (the cruise starts from Haikou and he needs to fly there first).

"It’s not at all about the money — Xisha Islands are part of China but unfortunately, not many Chinese have been there," Fu said.