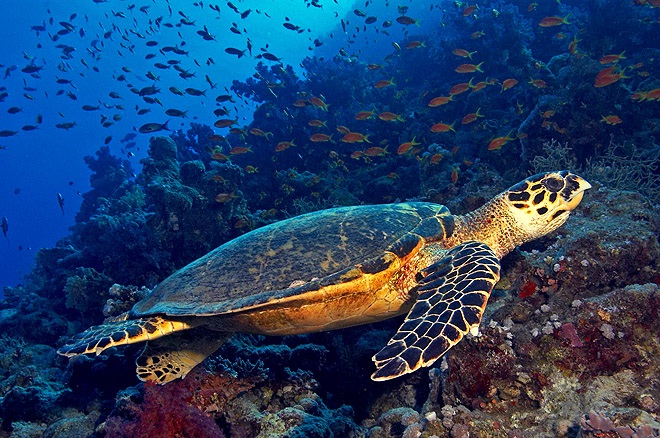 More than 110 fisheries enforcement officers from 29 border checkpoints, plus 10 officers from the Industry & Commerce department and border police, took part in an enforcement training workshop earlier this month in Haikou, Hainan Province, China.

Research by TRAFFIC has identified the island province of Hainan as a major hub for the illegal trade in marine turtles in China.

A survey in 2009 found significant levels of marine turtle trade, which had not declined by the time of a follow-up survey in April this year.

This month’s meeting, organized by the Department of Ocean and Fisheries of Hainan Province in collaboration with TRAFFIC, provided participants with useful tools, knowledge and materials to strengthen their capacity to combat the illegal harvest and trade of marine turtles and other protected aquatic species.

Mr Xing Zhigang, Deputy Director of the Fisheries Inspection Division, Department of Ocean and Fisheries of Hainan, reminded participants about China’s relevant wildlife legislation, and reiterated why the laws were needed to help maintain the balance of marine eco-systems. He urged officers to enforce the laws appropriately during their daily activities.

International commercial trade in marine turtles is illegal under CITES (the Convention on International Trade in Endangered Species of Wild Fauna and Flora). Most countries in the region, including China, have national legislation that also protects marine turtles from commercial domestic trade. Despite this, illegal trade of marine turtle products – including shell, meat, eggs and whole specimens – still persists in the Asian region.

The Coral Triangle refers to the tropical marine waters of Indonesia, Malaysia, Papua New Guinea, Philippines, Solomon Islands and Timor-Leste where high coral species diversity is found. It is home to six of the world’s seven species of marine turtles.