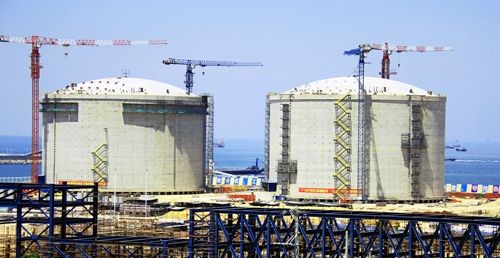 China's largest offshore oil producer announced on Monday that it has inked an agreement to buy liquefied natural gas (LNG) from BG Group and increased its stakes in an LNG project in Australia.
Under the contract, the China National Offshore Oil Corporation (CNOOC) will purchase five million tonnes per annum (mtpa) of LNG, starting in 2015, from BG Group's global LNG portfolio for 20 years.
By then, the CNOOC's mid-and-long-term LNG contracted volumes will reach 21.6 mtpa, the company said in a statement on its website.
The CNOOC will also acquire a 40-percent equity interest in QCLNG Train 1, increasing its equity ownership from 10 percent to 50 percent at a cost of 1.93 billion U.S. dollars.
It will acquire a 20-percent equity interest in the reserves and resources of certain BG Group tenements in the Walloons Fairway region of the Surat Basin, Queensland, increasing its equity ownership from 5 percent to 25 percent.
It will acquire a 25-percent equity interest in certain other upstream tenements held by BG Group in the Surat and Bowen Basins, Queensland.
The CNOOC and BG Group will also jointly invest in building two more LNG transportation ships in China.
Those transactions will be completed by the end of this year.
Wang Yilin, chairman of the CNOOC, said, "These new agreements with BG Group will not only substantially enhance the partnership in QCLNG and further the cooperation in the field of LNG between both parties, but also significantly facilitate the construction of CNOOC's overseas production base of LNG."
"CNOOC will continuously strive to acquire competitive natural gas resources around the world, and to make positive contributions to developing China's natural gas industry and securing clean energy supply to China," he added.
The CNOOC imported 11 million tonnes of LNG in 2012. Currently, it operates 4 LNG receiving terminals in Guangdong, Fujian, Zhejiang and Shanghai.
It is constructing Zhuhai, Hainan, Shenzhen and other LNG receiving terminals, which will be commissioned in the coming years.
SOURCE: china.org.cn
Editorial Message
This site contains materials from other clearly stated media sources for the purpose of discussion stimulation and content enrichment among our members only.