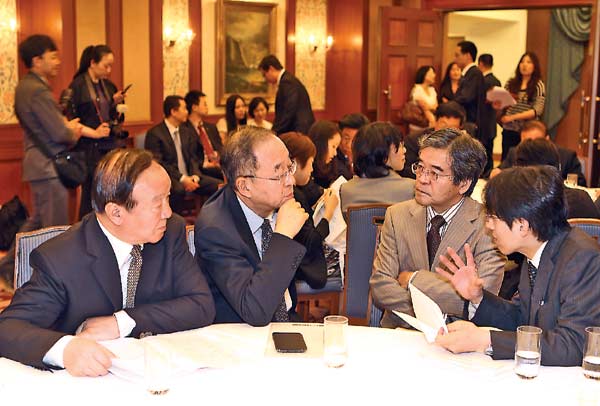 Liu Zepeng (second left), a member of the Chinese People’s Political Consultative Conference Standing Committee, and Jiang Xiaoyu (first left), vice-chairman of the Beijing Olympic City Development Association, talk with Aida Hirotsugu, chief of the editorial writer team for Kyodo News, at a group discussion in Tokyo on Sunday. XU JINGXING / CHINA DAILY
Chinese experts in Japanese studies are calling for China and Japan to communicate more with each other, saying that will reduce mistrust that exists between the two neighbors.

"China and Japan, as the two powerful economies in one of the most economically vibrant areas, should make internal adjustments and build a common identity based on shared values," said Shen Shishun, an expert on Asia-Pacific studies with Haikou College of Economics in Hainan province.

The eighth Beijing-Tokyo Forum, co-sponsored by China Daily and Japan’s Genron NPO, began in Tokyo on Sunday to give intellectuals from both countries a forum to talk about issues of importance in their home countries’ relations with each other.

Shen said China and Japan can now more than ever meet each other on an equal footing.

Distrust between China and Japan, the two biggest economies in Asia, has both provided fodder for media stories since the start of this year and given rise to concerns and visions about the region’s possible integration.

About the causes of the latest bout of distrust, Shen said: "Once the largest economy in Asia and the second largest in the world, Japan naturally views any country that wants to catch up to it as being a threat. So it can’t face up to the fact that China has surpassed it and is annoyed by China’s growth. And that’s why the expansion of economic interdependence between the two sides is also generating anxiety and distrust, along with mutual benefits."

After World War II, Japan’s economy thrived partly through interventions by its own government and partly from US aid. For years it enjoyed stable government, cooperation among manufacturers, suppliers and distributors and the benefits of having powerful enterprise unions.

But the global financial crisis has hit the country hard, causing it to go through a "lost decade". Meanwhile, a revolving door in the highest levels of government threatens to undermine the Japanese people’s trust and confidence while officials struggle with persistent debt and deflation.

China can be seen as being on a different path. Its economic influence in the world did not become considerable in recent times until the 1980s. In the past 30 years, though, China has had the world’s fastest-growing economy, exhibiting a 10 percent annual growth rate on average. It is now has the second-largest economy in the world following the US, having overtaken Japan in 2011.

Zhou Yongsheng, a professor of Japanese studies at China Foreign Affairs University in Beijing, said its debatable what the side effects have been of the increasing economic dependence of China and Japan on each other.

"Japan’s reliance on exports to China for the economic rebound may give rise to concerns, but we do not see there being a politically cold and economically warm situation in Japan’s relations with the US," Zhou said. "In Europe, Germany and France depend a lot on each other, but their ties do not have much similarity with Sino-Japanese ties either.

"Therefore, what leads to political distrust are most likely issues having to do with territory, national strategy and similar matters."

Zhou said communication impasses are still among the most important contributors to the political distrust that exists between China and Japan.

"The means of communication is still insufficient, especially between common people in the two countries," Zhou said. "The two peoples live and think in isolated environments, knowing little about each other, which consequently leads to misunderstandings and distrust."

Shen said it is important to have more channels of exchange.

"Asia’s future completely depends on the settlement of conflicting opinions between China and Japan," Shen said. "Otherwise, we can never have a stable Asia, not to mention an integrated Asia."