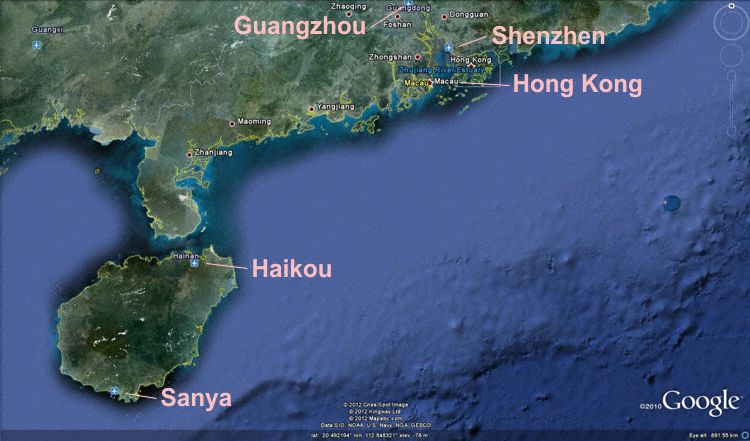 A China Eastern Airbus A321-200, registration B-6592 performing flight MU-2371 (dep Feb 22nd) from Shanghai Hongqiao to Haikou (China), was on approach to Haikou at about 01:12L (17:12Z Feb 22nd) when the crew needed to go around from decision height being unable to establish visual contact with the runway.
The crew subsequently decided to divert to one of their filed alternate airports Sanya located 115nm southsouthwest of Haikou, Guangzhou located 250nm northnortheast of Haikou or Shenzhen located 250nm northeast of Haikou. Believing that their preferred alternate Shenzhen was not available the crew opted to divert to Guangzhou. While on approach to Guangzhou, about 48 minutes after the first go-around, the crew needed to go-around in Guangzhou, too, declared emergency and decided to divert to Shenzhen, located about 45nm southsoutheast of Guangzhou. The aircraft eventually landed safely in Shenzhen with 2.6 tons of fuel remaining, above required final fuel reserve, about one hour after the go-around in Haikou.

All three alternate airports were said to have refused to accept the aircraft causing outrage in Chinese media.

Sanya Airport clarified that they would have accepted the aircraft, suitable weather conditions existed at that time. It was the choice of the crew however where they diverted to, and the aircraft never headed towards Sanya.

Shenzhen’s Air Traffic Control reported that Shenzhen Airport had received a high number of weather related diversions and all parking stands were in use already, so that any new unscheduled arrival would have needed to park on taxiways. The airport had therefore transmitted that the airport would no longer accept "non-emergency alternates". A trainee controller communicated this notification to the crew of MU-2371, it is possible that a misunderstanding arose creating the impression with the crew that Shenzhen was not available at all and thus left them with the choice of Sanya and Guangzhou. The airport did not hesitate to accept the aircraft upon second request (editorial note: which was the emergency declaration).

China’s Civil Aviation Authority is investigating the occurrence. Sources within the CAAC indicated initial findings give reason to be critical of all three alternate airports, but suggest the primary cause was Shenzhen causing the confusion and raising the impression the airport was not available though the airport was suitable and preferred by the crew.