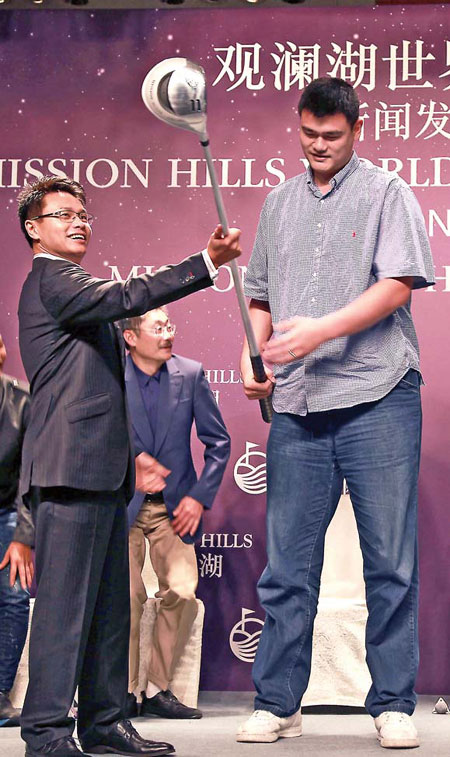 Ken Chu, Chairman and CEO of Mission Hills Group (left), grants a specially made club to Yao Ming at the press conference to launch the Mission Hills World Celebrity Pro-Am golf tournament in Shanghai on Wednesday. Yao will play in the tournament, which will be held in Hainan in October. Provided to China Daily

As Yao Ming teed off on the stage of a luxury hotel in Shanghai on Wednesday, the former NBA center took on yet another job – charity ambassador of a celebrity pro-am golf tournament.

Although he ended his professional career last July, the basketball legend still assumes a number of roles including father of a 2-year-old girl, founder of his namesake foundation, an undergraduate at Shanghai Jiao Tong University and even a member of the standing committee of Shanghai’s political advisory body.

But the 31-year-old disclosed on Wednesday that he has recently found himself addicted to golf, and he will compete with other big names at the Mission Hills World Celebrity Pro-Am in Hainan province in October.

"There are many things that basketball could learn from golf. For one thing, each golfer has his own ball, and they don’t need to scramble for it like basketball," the former Houston Rockets center said during his address.

"I am a totally fresh hand in golf and just began to learn how to play it. Golf is a good experience, and it brings back fond memories of when I was strong-minded and determined to go on the path when I started to learn basketball in my childhood."

Yao said golf has many similarities with charity.

"Both might not run smoothly, and present many obstacles to overcome," he said. "In both sectors we need to brave the difficulties and continue to advance toward the goal."

Yao said he hopes golf will help him keep fit, as he has been struggling to control his weight since retirement.

"If golf proves useful in weight control, I will persist with it," he said.

This year’s tournament features a long list of big names. The host – the Mission Hills Group, a pioneer in China’s fledging hospitality, sports and leisure industry – is trying to enlist more stars in the coming months.

But Yao, arguably the biggest attraction, said he wasn’t confident about playing against other stars, some of who have been golfing for years.

"I am afraid I will have to select the weakest one if I have to choose a single player to confront," Yao told China Daily after the ceremony. "But I am not sure who is the weakest one now – I will find out on the course. I will practice during summer break and try to catch up with them."

His school work doesn’t leave much time for golf. Yao has reportedly been performing poorly in school, with math his biggest headache.

On Wednesday, Yao declined to talk about his performance, saying only that he has completed his freshman year and enjoyed the summer break.

"You can ask my teachers about my scores," he said.

The Mission Hills tournament was first staged in 2010 and has become one of the region’s leading lifestyle and entertainment events. It will adopt a new format in an effort to make it more entertaining. The professional golfers will compete for a purse of $1 million.

Next news: Shanghai flight bound for Haikou diverted for emergency landing in Shenzhen