Mission Hills Group to expand in China through brand marketing 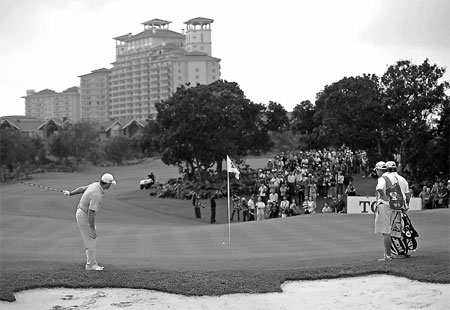 Ken Chu, chairman of Mission Hills Group, wants to tee off from his southern stronghold, aiming for the distant greens of the rest of the country.

The 38-year-old is pledging to expand his company, which currently has 15,000 staff, to golf clubs in other parts of China – through the use of brand marketing.

"We are bringing our tried and true brand and golf management services to Beijing, Shanghai, Xi’an, Yunnan, Chongqing and other destinations," Chu said in an exclusive interview with China Daily. "Just like hoteliers developing hotel chains, we’ll spread the golf brand throughout China."

Through a business model of offering sports, health services, five-star hotel resorts and exhibition spaces, Mission Hills is driving the industry at a time when the sport is on the cusp of a windfall.

According to the China Golf Association, there are at least 3 million golfers in the nation and more than 500 courses, an astounding number considering there was no golf course in China until 1984.

In 1994, Mission Hills began its golf operations in Shenzhen and Dongguan, Guangdong province, with 12 courses designed by some of the biggest names in the sport, such as Jack Nicklaus, Greg Norman and Ernie Els. The courses were completed in 10 years.

The golf club, regarded as the world’s largest golf facility by the Guinness World Records in 2004, has played host to more than 100 international tournaments, including the 1995 World Cup of Golf and the 2001 Tiger Woods China Challenge.

With another 10 courses that opened last year on the island province of Hainan, Mission Hills owns properties covering more than 40 square kilometers.

"I understand that there is land restriction in golf development in China so it doesn’t mean Mission Hills will roll out and go to different cities to build new Mission Hills," Chu said.

"I can help existing golf courses that are not doing as well as they should to reposition them, to remarket them and to make them profitable for the existing owners because Mission Hills has 20 years of experience in golf management."

Golf clubs deemed unfit for year-round operations, in northern China, for instance, will not only be branded under the Missions Hills name but will have a contractual agreement to allow, or share, cross-national memberships. Members of a club in Beijing, for instance, would be able to use the Mission Hills courses in Hainan. This move will also allow the company to absorb an unprofitable golf club’s staff.

"We’ll also bring international tournaments to cities and TV network distribution deals," said Chu, who took over the reins of the Mission Hills Group after his father, David Chu, died in August.

David Chu is considered by many in the nation to be "the father of golf in China" for spearheading the game’s rise to prominence, such as building the 12 golf courses in Guangdong.

He had also lobbied for the sport to be included in the Summer Olympics and promoted the game’s popularity in China until his death. In 2009, David Chu was named in Golf Inc magazine’s list of "the most powerful people in golf".

"I’m so proud to say the world’s largest public golf facility is not in the United States, not in Europe, but in Hainan, China," Chu said. "There’s no barrier to playing golf. You don’t need a membership here and you can play for as little as 480 yuan ($73) per round."

But Chu did not stop at that. Not long after the central government announced plans to turn Hainan province into a top tourist destination by 2020, Mission Hills’ Haikou golf destination became a fully equipped resort with a dozen restaurants and boasting a warm spring.

On May 24, Chu joined Huayi Brothers Media Corp Chairman Wang Zhongjun and China’s box-office wizard Feng Xiaogang in announcing that they would invest 5 billion yuan to create a special tourist attraction in 2014 within the Mission Hills Haikou resort, with streets and structures featuring scenes from director Feng’s movies.

"If you have the ability to travel or to eat in a restaurant, you are actually providing a job for an operator," Chu said. "That’s why the service industry is still China’s most crucial element in driving future growth."

He said the island resort is also environmentally friendly because it uses sustainable building materials.

But there is still great room for increasing the number of visitors. Haikou received about 8.4 million travelers last year, according to official statistics.

"Obviously we have capacity to receive more guests," he said.

The Hong Kong resident said the special administrative region has as many as 17 flights to Phuket Island in Thailand on an average day, but only one to Hainan.

To build an international tourism island, Hainan must take advantage of its policies such as visa exemption and of the people "on its doorstep" by increasing the number of flights.

"Hong Kong is only one hour away from ‘the Hawaii of the East’, " he said.

Last year, the number of visitors to Hong Kong exceeded 40 million, 40 percent of whom came from outside the mainland, according to statistics from the Hong Kong Tourism Board.

One area the company is staying away from is securing a listing on the Hong Kong stock exchange, despite speculation to the contrary.

"Not all investors will agree with me in using their investments to develop a wasteland, or a very raw area, but I know it can be done because we did it 20 years ago," Chu said.

Since the early 1990s, the group has been developing property and facilities on hills and patches of wasteland away from city centers. Mission Hills Haikou, for example, was built on the city’s 20 sq km of volcanic lava rock.

"Stock investors tend to look at short returns, quick returns, but all this investment is long-term," he said, adding that 5 billion yuan was budgeted for the Hainan resort. "So (investors) may not understand (what I’m doing or want to do), and I don’t care about their skepticism. What I care about is how the local people and governments react – they must see value (from our investments)."

David Levy, director of China Golf magazine, said he thought it was smart of Mission Hills not to go public. "Once you get listed publicly, you come under a lot of scrutiny and some of that scrutiny is unfortunately beyond your ability to control," said Levy, a close friend of Chu’s family.

Levy said companies go public because they want to be able to build up a cash flow. When it comes to a family business such as Missions Hills that involves many family members, going public means everybody has their individual share holdings. The children of David Chu work very closely as a team, and most of them play a vital part in running the company.

"I think what is happening here is first of all, with the connections and with the growth they have shown, and with a lot of people that are prepared to support the company, you don’t need to go public in order to grow," Levy said.

Next news: Crackdown on fake taxies bears fruit in Sanya