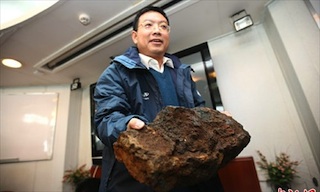 Back in China, the team has flaunted some of the things found under Nigeria’s water.

Among them a rare crab specie and an undersea rock, shown above.

It was the first time for a Chinese research team to lead an operation in an African country’s exclusive economic zone.

"It is a groundbreaking voyage in terms of boosting marine cooperation between the two countries,” said Li Bo, an official with the China Ocean Mineral Resources R&D Association, organizer of the expedition.

The mission will help both sides better understand the underwater landscape and fishery conditions in the area, Captain Cao Yezheng said.

The expedition started in April. After setting sail from Sanya in south China’s Hainan province, the ship sailed 38,000 nautical miles through the Atlantic Ocean, the Indian Ocean and the Gulf of Guinea.

The Ocean One is China’s only open-ocean vessel designated and equipped for deep sea research.

"We were able to understand the water chemistry, understand the sea channel, the fishery condition and some other areas that needed to be touched,” Cao had said at a brief reception in Lagos, attended by Dr. Liu Xianfa, consul general of China in Lagos.

Also speaking, Emmanuel A. Ajao, the acting executive director of Nigerian Institute of Oceanography and Marine Research (NIOMR) said the successful scientific joint research program will benefit both of the two countries and the world.

SOURCE: pmnewsnigeria.com
Editorial Message
This site contains materials from other clearly stated media sources for the purpose of discussion stimulation and content enrichment among our members only.
whatsonsanya.com does not necessarily endorse their views or the accuracy of their content. For copyright infringement issues please contact editor@whatsonsanya.com

Next news: Hainan, Fujian to build 30 more airports by 2020 for general aviation