Rescuers save a man trapped in a destroyed vehicle after pileups in East China’s Jiangsu province, June 3, 2012. [Photo by Li Gen/Asianewsphoto] 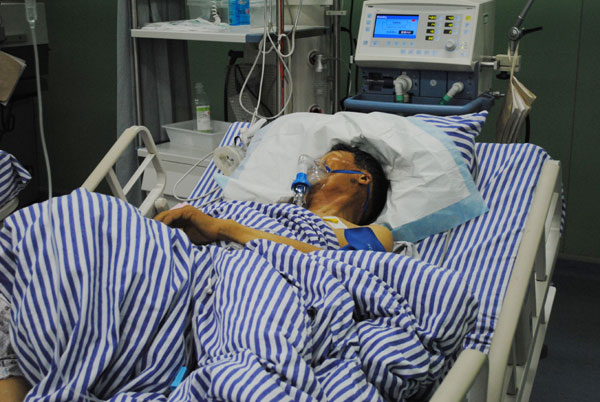 A passenger injured in a car accident receives treatment at a hospital in East China’s Jiangsu province, June 3, 2012. [Photo by Li Gen/Asianewsphoto]
At least 11 people were dead and 19 others were injured, five seriously, in seven highway pileups caused by heavy fog that occurred Sunday morning in East China’s Jiangsu Province.

The pileups happened between 5:20 and 5:40 am on the Yancheng section of the Shenyang-Haikou Expressway. A total of 19 vehicles were damaged, one of which leaked trace amounts of phenol.

The local environmental department examined the leak and said it did not result in any serious pollution.

Traffic had resumed on the highway as of Sunday afternoon.

Next news: Last to cross the line but closest finish so far, Sanya reflects VOR Leg 7