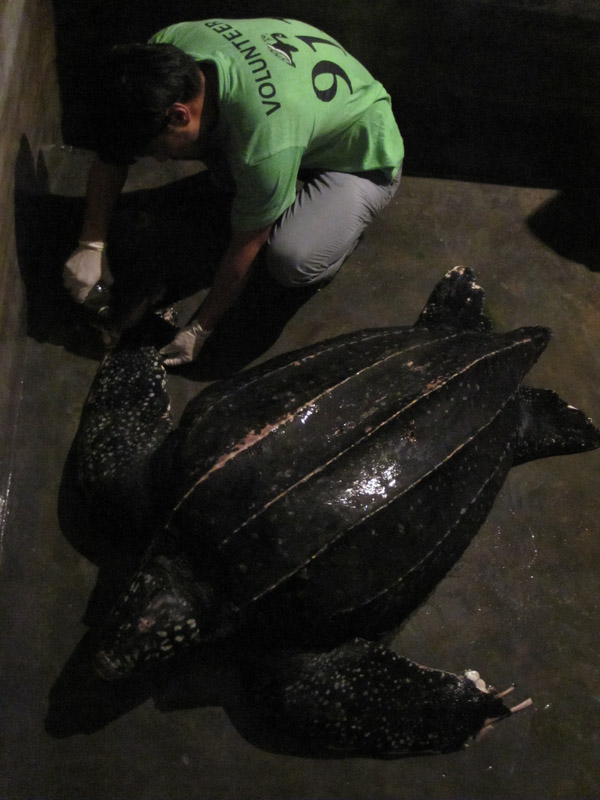 Chinese fishermen have reported the death of a Leatherback sea turtle (Dermochelys coriacea) on Hainan Island, China. The turtle was caught as by-catch by a fishing vessel on November 24 and held in a concrete saltwater pool. Leatherback turtles are adapted to the open ocean, so they swim continuously against tank walls since these pelagic turtles do not recognize physical barriers. Contact with the rough surface caused tissue abrasions, bone exposure, and infection on the Leatherback’s nose, flippers, and ridges along the back of its shell.

When the turtle’s finger bones protruded from its skin and began falling out, the fisherman housing the turtle reportedly searched online for information on how to care for Leatherbacks in captivity. After failed attempts at restoring its health, the fisherman contacted Sea Turtles 911, the American based sea turtle conservation organization that operates in China. Medical volunteers experienced in sea turtle rescue and rehabilitation immediately arrived on the scene to help, but upon examination of the Leatherback her condition was terminal.

Sea Turtles 911 Founding Director Frederick Yeh describes, "She was very weak, very far gone. Despite the emergency treatments we performed, there was little we could do at that point to save her. Leatherbacks are particularly vulnerable to injury in captivity, and the fisherman contacted us much too late. The waste of such a precious life is heartbreaking."

The turtle was a female weighing approximately 500 pounds (227 kg) and measured 5 feet (1.5 meters) in length. The local Hainan name for Leatherbacks literally translates into ‘tire turtle’ due to their black, rubbery bodies resembling the appearance of a tire. Leatherback sea turtles are listed as critically endangered on the IUCN Red List of Endangered Species, primarily due to direct harvest by humans who take their eggs from nesting beaches, or kill the turtles for their meat, leathery skin, and for oil extraction. Leatherbacks have no cultural significance in Chinese trade, unlike Green (Chelonia mydas) and Hawksbill (Eretmochelys imbricata) sea turtles, which incur high prices in the illegal market. However, fishermen will bring by-catch Leatherbacks onto land and attempt to sell them.

It is unknown how many Leatherback sea turtles are bought and sold illegally in China, or what they do in the surrounding waters, but the frequency of local fishermen reporting ‘tire turtle’ sightings suggests possible migration routes past the island. Yeh is determined to find out for certain, "This beautiful, rare sea turtle’s death cannot be in vain. We need more resources to help us find out what the Leatherbacks are doing here, and how many are being taken by local fishermen. Only then will we be properly equipped to protect them."