‘I did NOT sleep with Bo Xilai’, Zhang Ziyi tells media in Haikou 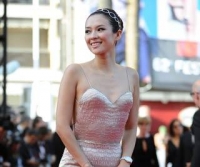 Chinese actress Zhang Ziyi has for the first time, directly addressed a media report in a Hong Kong tabloid which claimed she had slept with powerful Chinese officials for money, and was under a travel ban as she is being investigated for her alleged links to disgraced former top Chinese official Bo Xilai.

"I’d like to thank everyone for their concern. I really want to tell everyone my attitude about this.

"This ‘news’ is a complete lie. Both within the article and between the lines, there were contemptuous lies," said Zhang during a press conference after the 12th Chinese Film Media Awards in Haikou on Wednesday, reported Chinese media.

"I met with my lawyers in Hong Kong and clearly expressed my position."

"Whatever the cost, I will seek legal recourse and pursue this matter to the very end," said Zhang, referring to an article in a Hong Kong tabloid that has triggered a wave of rumours about her.

Zhang explained that she seldom went out of her way to explain or respond to rumours and fabricated news, but decided to take the Hong Kong tabloid to task for the article as it, and other similar media reports, gave people a bad impression of the Chinese film industry.

"I read a lot of comments from people who don’t know the truth and they think this film industry is like that (rife with unsavoury dealings).

"This time, these (irresponsible reports) have not only hurt me, but maligned the film industry. And worse of all, they (some media outlets) made use of such hot topics to fool the public," said the 32-year-old actress.

During the press conference, Zhang also revealed why she was absent from the world premiere of her new film "Dangerous Liaisons" at the Cannes Film Festival recently.

"I believe film festivals are the most direct, most global platforms to promote a film. I feel if you have a film, its best to show the film and promote it at a film festival.

"I didn’t go because I was re-shooting some scenes for ‘The Grandmasters’ in Guangzhou … Wong Kar Wai (the director of "The Grandmasters") wouldn’t give me time off to go."

"Also, because I didn’t watch the final cut of the film ("Dangerous Liaisons") before, I was feeling a little uneasy about it (attending the premiere)," said Zhang, putting to rest speculation that it was her rumoured travel ban which forced her to give the premiere a miss.

While Zhang still did not know when Wong’s "The Grandmasters", which has been in production since 2009, will be completed, she said work is already under way for her next film "Sophie’s Revenge 2", which will go into production once she is done with Wong’s martial arts epic.

"The week before last, my colleagues have already gone to check out locations in Macau, Singapore and Hong Kong," said Zhang of "Sophie’s Revenge 2".

"After shooting ‘The Grandmaster’, we will be working on that."

malaysia-chronicle.com
Editorial Message
This site contains materials from other clearly stated media sources for the purpose of discussion stimulation and content enrichment among our members only.
whatsonsanya.com does not necessarily endorse their views or the accuracy of their content. For copyright infringement issues please contact editor@whatsonsanya.com

Next news: Abu Dhabi sets to be victorious on Leg 7 of VOR in Lisbon