2012 APEC SME Summit to be held in Chengmai,Hainan this December 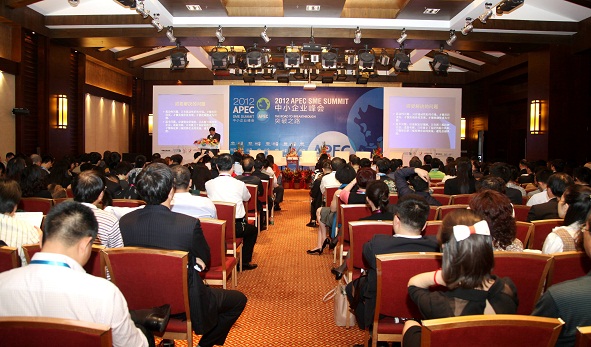 The 2012 APEC SME Summit, co-hosted by the China Council for the Promotion of International Trade (CCPIT), the People’s Government of Hainan Province and APEC Business Advisory Council (ABAC), will take place on December 8-10 in Chengmai, Hainan Province, the International Tourism Island. Coinciding with the "SMEs Service Year", this year also marks the fifth anniversary of the APEC SME Summit in China. Being the top event of its kind relating to SMEs, the APEC SME Summit has proven to be a unique high-profile forum for business leaders.

Here on the stage Jack Ma once said, "Anyone who turns a blind eye to SMEs will surely lose his future career." Mr. Liu Chuanzhi said, "Put the focus on the part of your own work". Howard Schultz, CEO of Starbucks, said, "Just ignore the negative voice that may mislead your dream come true". Economist Zhou Qiren said here that "The potential of China's domestic demand is yet to be released". Even now, their penetrating words still ring in the ears.

This year, SMEs will face more prominent difficulties. Long-term and short-term contradictions and problems coexist, which will pose a tough challenge to the development of SMEs. Considering these issues, we have set "The Road to Breakthrough" as the summit theme this year and prepared an agenda that will address a vast range of hot topics including "SMEs' Access to Financing"," Industry's Revitalization Road","Reshaping Chinese Labels in the Overseas Market" , "Enterprise Culture: the Brand's Gene", "The Productivity of Fashion", "Prospects for the Logistics Industry", "Social Media", and "The Future of Oceans".

In addition, "The Internet Theme Day-2012 Asia Internet Conference" will be held concurrently with the APEC SME Summit. Several Internet elites from the APEC region will get together in Hainan.

Chengmai, the summit venue, has been honored as "the Life Longevity Town". It is located close to the west coast of Haikou, and has a long history and profound culture. The summit will take place in the best season in Chengmai. You will definitely be fascinated by the beauty of this stunning place. It will welcome the guests from home and abroad with its hospitality and refreshing image.

Next news: Changfeng Energy to increase price of natural gas in Sanya City