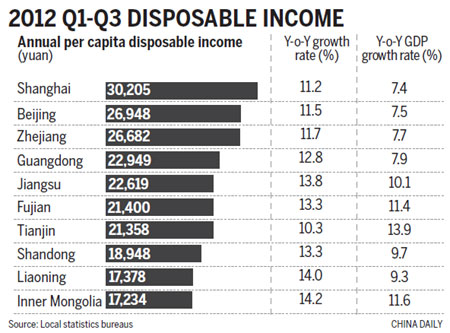 In almost all regions of China, urban disposable income has grown faster than GDP during the first nine months, indicating that the Chinese population continues to reap the benefits of the country’s economic growth.

According to the latest figures, released over the past month individually by local statistics bureaus, 26 out of 28 regions said that per capita disposable income registered faster growth than GDP growth in the first three quarters of the year.

The largest margin was in Hainan province, where urban disposable income increased by 14 percent, while GDP grew by 8.4 percent.

It was followed by Guangdong province, where disposable income grew by 12.8 percent, while GDP grew by 7.9 percent.

Nationally, the urban income of 22 regions outgrew the nation’s average of 13 percent.

According to other figures from the National Bureau of Statistics, average urban income across the country hit 18,427 yuan ($2,956) in the first three quarters.

Experts said they viewed the latest figures as positive, and that they echoed the goals set out in the report of the 18th National Congress of the Communist Party of China. According to the report, China’s per capita income for both urban and rural residents should be doubled by 2020.

Looking back over the past three decades, Chinese incomes have increased by an average of less than 8 percent a year, lagging behind average GDP growth.

Scholars and policymakers also continue to point out that they remain concerned that over the past 20 years, household incomes have not benefited as much from the country’s economic success as the corporate and State sectors, with the gap between the urban and rural populations continuing to widen.

The debate has given rise to calls for further reform of the current system of income distribution.

Last month, the State Council promised to draft a plan aimed at expanding the wealth of the middle classes and raising the incomes of those considered poor. But there has been no detail as yet of how this can be realized.

A recent study by the China Household Finance Survey at Southwestern University of Finance and Economics found that the top 10 percent of Chinese households accounted for 57 percent of total income and 85 percent of total assets – a concentration level of income that can only be found in some African countries, such as South Africa and Seychelles.

"The striking inequality in income levels among Chinese is the fundamental reason behind China’s depressed consumption," said Gan Li, who led the study.

However, Li Daokui, director of the Center for China in the World Economy at Tsinghua University, revealed his own research over the weekend, which showed that China’s economy has actually showed signs of a rebalancing, with a U-shaped recovery in household consumption compared to GDP.

Economists suggest there are various ways of raising residential incomes and boosting consumption.

Gan says the key is to improve the incomes of the lowest-earning households.

He added that what China needs is a plan similar in nature to The Great Society – the ambitious social program introduced in the US in the late 1960s by President Lyndon Johnson, which aimed to help people out of poverty.

"However, in China’s case, no tax increases are needed. But the government does need to change its spending priority.

Justin Yifu Lin, a former chief economist and senior vice-president at the World Bank, said over the weekend at the Financial Street Forum in Beijing that China should give more support to its labor-intensive industries by raising income levels.

He said China still has the potential to grow at 8 percent a year for 20 years, but added: "We need to develop a financial system centered on regional and small and medium-sized financial institutions.

"They provide funds and services to companies in labor intensive sectors," adding that interest rates should be liberalized so that public depositors can gain better returns.

Lin also said that removing protection and subsidies for State-owned companies in capital-intensive sectors is vital to improving income distribution.

Next news: Hainan Haiyao to take 40% stake in SinoMab