HomeNews & Social MediaHainan NewsThe Aussies are here in Wanning, so is the ISA China Cup

The Aussies are here in Wanning, so is the ISA China Cup 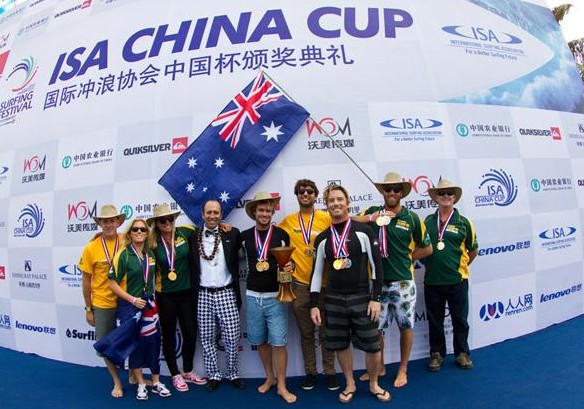 ISA President, Fernando Aguerre, with the inaugural ISA China Cup Gold Medal Team, Australia. Eight National Teams, including the defending Team Champs, have been invited to the January 2013 event. Photo courtesy of ISA.
The International Surfing Association (ISA) has announced that the second edition of the Hainan Wanning Riyue Bay International Surfing Festival will be going down January 25-30, 2013 in Wanning, Hainan Island, China

"After the great success of the inaugural Hainan Wanning Riyue Bay International Surfing Festival in 2012, which produced the largest media audience ever in the history of the ISA, I’m very excited in bringing the ISA back to China,” said ISA President Fernando Aguerre.

"Surfing Teams for the ISA China Cup, and the ASP Men’s 4-Star Hainan Classic. Our partners at Womei Advertising, led by its CEO, Mr. Yang Dunhao, have once again delivered all of the financial and political resources needed for the 2013 Hainan Wanning Riyue Bay International Surfing Festival to be the most important event on the global surfing calendar next year. The opportunities for the development of surfing in China are endless, and this new event will continue our path in the right direction.”

Read on for details:

Next news: Revenues down for Haikou Packager Shiner at its 3rd Quarter Fiscal 2012