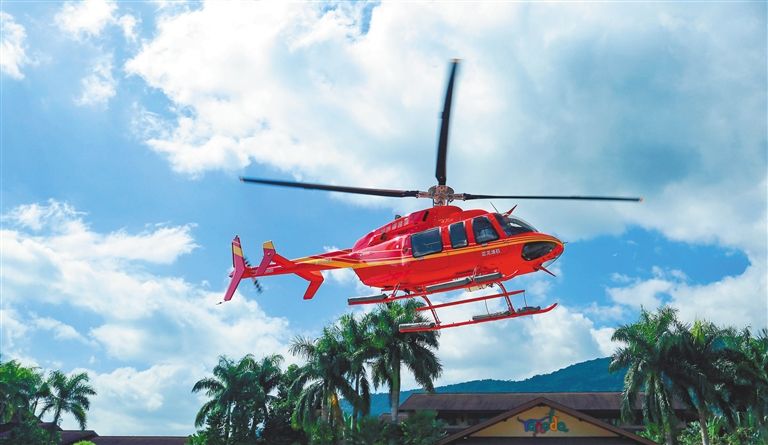 China's aviation authorities have released a roadmap for the opening-up of the country's low-altitude airspace at an ongoing international airshow.
The 9th China International Aviation & Aerospace Exhibition, which runs from Tuesday to Sunday in Zhuhai in south China's Guangdong Province , has seen top officials reveal progress toward the move, much anticipated for the extra freedom it will provide to a hungry aviation market.
China will, starting next year, comprehensively push forward construction of communications and monitoring facilities in this field and gradually form a unified national low-altitude airspace management, operational and service system, said Ma Xin, deputy director with the state air traffic control commission.
The country has made substantial achievements in infrastructure construction to ensure a controllable and safe environment for sustainable development of general aviation, according to Ma.
Ma said facilities for radio communication and low-altitude airspace surveillance have been completed in districts of Changchun, Guangzhou and on Hainan Island.
Four general aviation flight service stations have also been put to use in Shenyang, Shenzhen, Hainan and Zhuhai to provide maintenance and refueling for general aviation jets flying in low-altitude space.
"We're overhauling a series of regulations on airspace management to greatly simplify flight application procedures," Ma said.
Ma said that as the reforms forge ahead, the general aviation industry will gain momentum and become a new growth point just like the car industry.
Pilot projects have been launched in China's northeastern and central-southern regions, as well as seven cities, including Tangshan, Xi'an, Qingdao, Hangzhou, Ningbo, Kunming and Chongqing.
It was back in November 2010 that the State Council and the Central Military Commission jointly decided to gradually open up the country's low-altitude airspace to general aviation.
Pilot projects have been launched in China's northeastern and central-southern regions, as well as seven cities, including Tangshan, Xi'an, Qingdao, Hangzhou, Ningbo, Kunming and Chongqing.
In spite of the recent strong push, China's general aviation is still in an "infancy stage" with massive gaps in both software and hardware, pointed out Wu Tongshui, president with the Civil Aviation University of China.
These gaps can be seen in nearly all basic components of general aviation, including operational rules, fixed base operators, flight service stations, aviation fuel suppliers and professional crew, he added.
In such a vast country, there are only 300 airports or landing points for general aviation aircraft, which only numbered 1,198 in China in October 2012.
"It is not an unreachable dream for China's new rich to have a private jet, but it is extremely hard and complicated to actually get it up into the sky due to the application process and lack of resources for maintenance," said Chen Yilong, who owns a four-seater helicopter and an eight-seater business plane.
Nevertheless, he has pumped about one million yuan (about 160,000 U.S. dollars) into satisfying his passion for flight, and has even started his own general aviation operation company.
SOURCE: China Daily
Editorial Message
This site contains materials from other clearly stated media sources for the purpose of discussion stimulation and content enrichment among our members only.

Previous news: From Jan 25 to 30, 2013, Wanning to become the surfing capital of the world