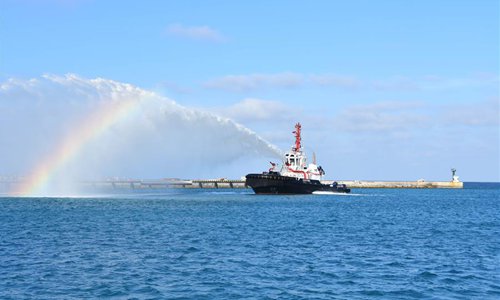 China is strengthening its offshore law enforcement capacity, with three provinces and one autonomous region launching their first joint patrol in the South China Sea on Wednesday.

The five-day patrol fleet consists of ships from the maritime safety administrations of Guangxi, Guangdong, Fujian and Hainan. Haixun 31, one of China's largest patrol ships, is also part of the fleet.

An official surnamed Song from the Maritime Safety Administration said the cross-province patrol will become a regular occurrence to enhance the offshore supervision capacity, but revealed no details about future patrol plans.

At present, the Maritime Safety Administration will arrange two or three patrols in the South China Sea aimed at preventing illegal activities including discharging excessive pollutants into the sea.

It is the latest move the country has taken to strengthen supervision of the South China Sea.

On Tuesday, the State Council approved a marine zoning plan for the southern provinces of Guangdong and Hainan before 2020, emphasizing offshore law enforcement capacity in both plans.

President Hu Jintao emphasized that the country's maritime interests should be strongly protected, as he opened the 18th National Congress of the Communist Party of China on Thursday.

China is preparing itself to deal with complicated marine disputes.

On July 24, Sansha city, Hainan province, the country's newest city, was established on Yongxing Island to administer the Xisha, Zhongsha and Nansha islands and their surrounding waters.

Another 36 inspection ships are expected to join the China Marine Surveillance fleet by 2013.

An insider told China Daily that a high-level maritime interests protection office was established recently with heads of the related ministries or administrations on board.

Sea disputes between China and other countries have surged this year.

The Philippines and Vietnam have tried to expand their sovereignty claim over the islands in the South China Sea, and tension in the area has not been helped by the presence of United States aircraft carriers and the announcement in October that US ships will travel through the South China Sea in order to pay a visit to the Philippines.

In April, despite strong opposition from China, Vietnam granted the Oil and Natural Gas Corp Videsh of India oil exploration rights in the South China Sea.

Qi Jianguo, the former Chinese ambassador to Vietnam, said that the island dispute shows how urgent it is that China strengthen its maritime law enforcement capacity.
SOURCE: China Daily
Editorial Message
This site contains materials from other clearly stated media sources for the purpose of discussion stimulation and content enrichment among our members only.
whatsonsanya.com does not necessarily endorse their views or the accuracy of their content. For copyright infringement issues please contact editor@whatsonsanya.com

Previous news: Phoenix Town strives to be a modern agricultural base of Sanya