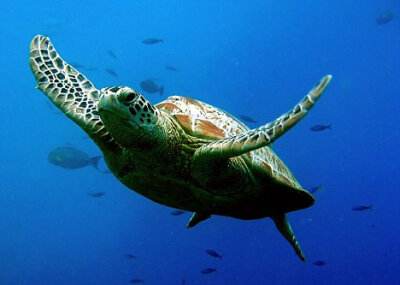 TRAFFIC is urging holiday makers not to buy marine turtle products through broadcasts in Hainan Province on local radio FM886.
The FM886 radio campaign aims to raise awareness among local fishermen, souvenir shop owners and tourists about the ongoing poaching, illegal processing and trade in marine turtles. Three key messages are being broadcasted at least nine times per day until March 2013.
Hainan Province was chosen for the campaign after ongoing TRAFFIC market surveys found the illegal trade in marine turtle parts rising there and in Guangxi Province. In 2009, TRAFFIC surveys found 4,812 marine turtle products for sale in 57 shops in Hainan, while in July 2012 the number had risen to 11,255 products in 92 shops.
The survey results were revealed today in a new report, Market Forces – An Examination of Marine Turtle Trade in China and Japan. The report finds significant growth of the trade in China and persistent demand from the bekko industry in Japan as factors influencing source country turtle populations in the Coral Triangle region, particularly Indonesia, Malaysia and the Philippines.
Asian countries, especially China and Japan, have a long history of using marine turtles and their products as luxury goods, souvenirs and traditional medicine.
“With Hainan a popular holiday destination and many thousands of visitors each year, there is a huge demand for souvenirs, but we would urge visitors not to buy goods made from marine turtles, which are being sold illegally,” said James Compton, TRAFFIC’s Senior Programme Director for Asia & the Pacific.
“Anyone buying or selling such goods faces prosecution and harsh sentences under Chinese law and is guilty of contributing to the decline in marine turtle populations throughout the region.”
Marine turtles are poached for their tortoiseshell scutes as well as for their meat and eggs. All species are banned from international commercial trade under CITES (the Convention on International Trade in Endangered Species of Wild Fauna and Flora), and in China they are listed as national second-class protected animals under the Wild Animal Protection Law.
In Japan, a persistent demand exists for highly decorative bekko pieces manufactured from Hawksbill Turtle shells, while in China the main demand is for jewellery and whole ornamental specimens, as well as scutes for use in traditional medicine.
Significantly, the Chinese government has acknowledged the seriousness of this problem and in June this year, the Ministry of Agriculture, Ministry of Public Security and General Customs launched a joint enforcement action against the illegal trade.
TRAFFIC has supported this initiative through working with local government authorities. In July 2012, more than 110 fisheries enforcement officers from 29 border checkpoints, along with 10 officers from the Industry & Commerce department and border police took part in an enforcement training workshop supported by TRAFFIC in Haikou, Hainan Province.
In Malaysia and the Philippines, where marine turtles are sourced, TRAFFIC provided similar training in 2011 for 30 enforcement officials working inside one of the Coral Triangle’s transboundary protected areas. Trainings in Indonesia and Viet Nam are also pending. These activities are being conducted under the auspices of the Association of Southeast Asian Nations Wildlife Enforcement Network (ASEAN-WEN). They have been accompanied by a review of national laws pertaining to turtles in Southeast Asia.
“Strengthening law enforcement is critical to deterring the illegal trade in marine turtles and the poaching of these animals in source regions,” said Lida Pet Soede, leader of WWF’s Coral Triangle Programme, based in Indonesia.
“We are happy to see the Chinese government paying increased attention to this illegal trade as part of its focus on combating the wildlife crime whose consequences are felt well beyond China’s borders.”
TRAFFIC’s work on combating the illegal trade and reducing the demand for marine turtle products in China is generously supported by WWF’s Coral Triangle Programme.
About WWF
WWF is one of the world's largest and most respected independent conservation organizations, with over 5 million supporters and a global network active in over 100 countries. WWF's mission is to stop the degradation of the earth's natural environment and to build a future in which humans live in harmony with nature, by conserving the world's biological diversity, ensuring that the use of renewable natural resources is sustainable, and promoting the reduction of pollution and wasteful consumption.
About TRAFFIC
TRAFFIC, the wildlife trade monitoring network, works to ensure that trade in wild plants and animals is not a threat to the conservation of nature. TRAFFIC is a strategic alliance of IUCN and WWF.
SOURCE: scoop.co.nz
Editorial Message
This site contains materials from other clearly stated media sources for the purpose of discussion stimulation and content enrichment among our members only.

Next news: 2012 Hainan Danzhou Int’l Marathon to kick off on Dec 15