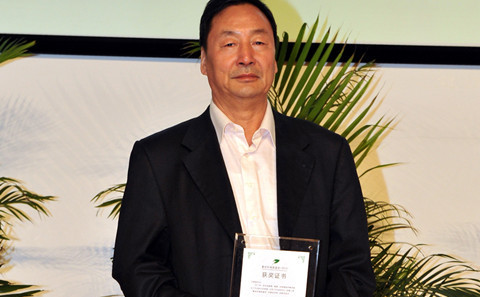 Before he was arrested, Liu wrote: “If one day I am detained, please don’t protest, as I have not broken the law. If one day I have some accident, please don’t be sad, just bury me under a tree and let me fertilise the seeds of truth.” (Image by Guo Xiaohe)
Earlier this month, Chinese environmental activist Liu Futang appeared in court in Hainan, accused of illegal business activities. Reporter Hai Pengfei, who went to watch the proceedings, reflects on the case.

Liu Futang, 65, winner of the best citizen journalist prize in chinadialogue’s 2012 China Environmental Press Awards, has been charged with carrying out illegal business activities. His alleged crime is to have printed, at his own expense, books on environmental protection. The public have good reason to believe the charges are revenge for Liu’s uncovering of environmental destruction.

The following article, covering his recent hearing, gives an insight of his predicament. Chinese environmentalists and the public have launched an online campaign in support of Liu, including a petition to have him named the “Hainan Environmental Envoy”. Liu and his family are currently waiting for a verdict in his case.

Liu Futang, once honoured by the public as an “environmental warrior”, appeared at Longhua District Court in Haikou at 9am on October 11, charged with carrying out illegal business activities. Specifically, he is accused of using a Hong Kong book number to print books on environmental protection, which he then sold or gave away.

Liu was brought to the court by ambulance at 7.30am. His court appearance was the first time he had been seen since he was taken from his hospital bed by the Haikou police over two months ago. He was then charged and remanded in custody at Hainan Prison Hospital. He has not been granted bail.

The hearing started at 9am, with Liu and three other defendants brought into the court one by one. Liu, who stands 180 centimetres in height, walked with a limp and looked tired and unhappy.

The five books cited in the charges are Green Dream, Ecological Warrior Liu Futang, Speaking the Truth, Hainan Tears I and Hainan Tears 2. These books are about Liu’s calls to protect the environment, his proposals to the provincial people’s political consultative conference (PPCC), and a record and commentary on his participation in environmental protection in Hainan, an island off China’s south coast and the country’s smallest province.

The Longhua district prosecutors accuse Liu of printing 18,000 books without approval from the provincial publication authorities, and then selling or giving them away. The case involves illegal turnover of 444,000 yuan (US$71,000), including illegal income of over 78,000 yuan (US$12,500) from sales of Speaking the Truth and the two volumes of Hainan Tears. According to the prosecutors, the circumstances of the case are "extremely serious.”

"These books you published, did they make money?” asked the defendant’s lawyer.

"That’s why I feel so unfairly treated. If I had wanted to make money I would never have published the books,” sobbed Liu, shaking as he clung to the metal bench. For over 10 years, Liu said, he had bought, printed and sent out books to promote and research environmental protection – and spent 200,000 yuan (US$32,000) of his own money. "They say I made over 70,000 yuan in profit, but that’s nowhere near what I spent. I made up the rest from my own salary. If I wanted to make a profit, I would never have done anything so daft.”

The prosecutors acknowledged Liu’s years of work on environmental protection, and his achievements, but said that a crime is still a crime. Publishing books without going through proper publishing houses and procedures breaches the regulations banning the trade in book numbers; and purchasing a Hong Kong book number and printing and distributing your own illegal books constitutes illegal business activity.

Liu’s lawyer, entering his not guilty plea, pointed out that these were not pornographic, pirated or seditious books. Liu paid to have the books published to advocate environmental protection, not to seek profit, and as such his actions do not constitute illegal business activity. He added that Liu’s actions did not endanger social or market order, so an administrative punishment would be sufficient.

Gesturing and smiling, the prosecutor retorted that “there is no requirement for an operation to be run for profit for it to be an illegal business – not all businesses are run for profit.”

Liu broke down again at the end of the hearing, as he complained of the injustice of being imprisoned with robbers, murderers and fraudsters. “And the so-called crime was mine, I’m very sorry that others have been dragged in.” With that he stood and bowed deeply to his three co-defendants, managers and employees of the printers.

A career protecting Hainan’s forests
Before he retired, Liu was responsible for fire prevention in Hainan’s forests. In 2001, with support from the provincial PPCC, Liu himself twice took aerial photos of the destruction of Hainan’s coastal shelterbelt forests. A Hainan reporter recalled Liu cramming his lanky frame into the cramped helicopter to undertake the dangerous flight over Hainan’s mountains and forests. Without those photos the three years of restoration of the shelterbelt would not have happened, nor the subsequent investigation into environmental law-enforcement.

On January 17, 2003, at a meeting of the Hainan PPCC, Liu, a member of the conference, gave a speech on dealing with the destruction of the province’s forests. Wang Qishan, at the time secretary of the provincial party committee, was so impressed he raised his hand to make a special statement. This was a major story during the Lianghui – China’s annual parliamentary season – that year. Media reported how the “conference member’s bombshell” had moved the party secretary to speak.

In December 2003, a titanium mining firm was felling coastal shelterbelt forests in the city of Wanning in Hainan. The locals prevented the illegal forest destruction, but two villagers were arrested by the local police for sabotaging production.

Liu, at the time a member of the provincial PPCC and the deputy chair of its Population, Resources and Environment Committee, rushed to the scene and helped find a lawyer for the detained villagers. He also submitted a resolution in support of the imprisoned villagers to the PPCC. In the end they were freed, and the shelterbelt was replanted with Coast Sheoak, and is now as dense as ever.

Liu wrote of the incident in Speaking the Truth, which he wrote after retiring in January 2009. At the hearing, Liu recounted how the book was rejected by three Chinese publishers as its content was “too sensitive”. With no way of publishing it on the mainland, he had no choice but to use a Hong Kong book number. Liu Jiquan, a colleague of Liu’s from his days at the provincial forestry bureau, told the court that the book provided great practical guidance for forestry workers, and that Hainan’s local forestry bureaus had only given token payments for costs and assistance.

A reporter who has known Liu for years said that, after retiring, Liu had learned to use the internet, as well as handwriting recognition software for typing, in order to bring his investigations on environmental protection in Hainan to a wider audience. He overworked himself and aged quickly, losing his hair and teeth and becoming hunched – a stark contrast to his erect and scholarly appearance of a decade earlier.

Liu would often stay up until two or three in the morning writing online. On one occasion, he was known to have slept for only three hours in two days. But he was happy to do it: “Just a 140-character microblog makes the people destroying the forests nervous and puts them on edge.”

"I have only spoken the truth”
On April 10 this year, Liu was awarded the prize for best citizen journalist by chinadialogue, the UK’s Guardian newspaper and Sina’s environmental channel at the third China Environmental Press Awards. Chair of the award committee and chinadialogue’s Beijing editor Liu Jianqiang said: “A year ago, he came to public attention when he exposed the destruction of forests in Hainan province, southern China. The awards committee found that he and his microblog had as much impact as a newspaper could hope for.”

Three days after the award was given, Liu rushed to the Hainan township of Yinggehai to report on a dispute over the building of a power plant. Liu posted dozens of microblog updates covering the disagreement, clashes between locals and police and injuries inflicted.

The same day, locals held a collection for injured relatives at Sanya’s old railway station. Liu donated 500 yuan and passed out copies of Speaking the Truth and volume 1 of Hainan Tears.

Two months later, his microblog and blog, registered under his real identity and with 16,000 followers, were shut down.

Some days later, Zhejiang environmental volunteer Wu Zhu called Liu and asked if anyone else had phoned to offer support.

"You’re the first,” Liu said with a bitter laugh.

In July, Liu was arrested and taken into custody.

Dozens of environmentalists from Hainan and elsewhere visited the court to show support for Liu on the day of his trial. His lawyer, Zhou Ze, also defended Xie Chaoping, who was arrested by police in Weinan, Shaanxi, two years ago, again for illegal business activities. He had published a book on forced relocations of people during the building of the Sanmen dam in the 1950s, which was confiscated as an “illegal publication”. That case led to nationwide anger and the Weinan police becoming the object of public contempt. Thirty days later, Xie was freed.

Zhou says that in his meeting with Liu, Liu was twice unable to hold back tears.

SOURCE: chinadialogue
Editorial Message
This site contains materials from other clearly stated media sources for the purpose of discussion stimulation and content enrichment among our members only.
whatsonsanya.com does not necessarily endorse their views or the accuracy of their content. For copyright infringement issues please contact editor@whatsonsanya.com

Next news: Spain’s Carlota Ciganda, one of the favourites at Yalong Bay Golf Club