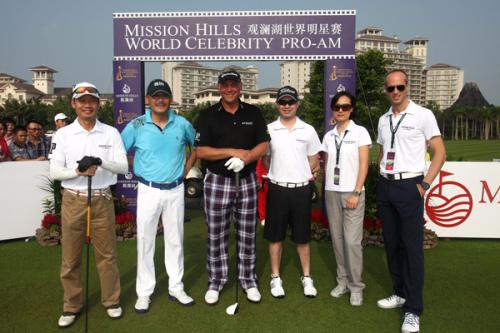 A star studded evening of glitz and glamour marked the start of the hotly anticipated 2012 World Celebrity Pro-Am at Mission Hills Haikou today.

Hainan Island in China was the showbiz capital of the world as celebrities from film, fashion and sport gathered at the prestigious Mission Hills Haikou resort for tournament’s official opening ceremony.

The evening proceedings commenced with a cocktail reception before guests were invited to the official opening ceremony and fundraising dinner which took place at the hotel poolside under the impressive backdrop of the Mission Hill’s twin volcanoes.

Canadian actor and Hollywood superstar Ryan Reynolds said: “I’ve never been to any kind of mega resort like this before. This place is an incredible feat of engineering and imagination.

"The golfing experience today has been incredible, to be out there with these professionals who are so gifted and talented and to learn from them and seeing the landscape architecture which is as impressive as the interior architecture of Mission Hills – it’s been a real pleasure.”

Speaking at the official opening ceremony, Dr. Ken Chu, Chairman and CEO of Mission Hills Group said; “It brings me great pleasure to welcome all to Mission Hills Haikou as we mark the start of what I’m sure will be another exciting World Celebrity Pro Am.

"We are passionate about growing the game of golf and events like this help raise the profile of the sport in Asia as well as raising valuable funds for charity. Above all it’s about bringing people together, having fun and making the most of our five star facilities and warm hospitality.”

Four time PGA Tour winner and current world number nine Matt Kuchar spoke on behalf of the players, he said: “There are very few events in the world that bring together so much talent from so many different walks of life and that’s what makes an event like this so special.

"What we’re doing here is not just playing golf, but creating something new and special that we hope will take the game to a new level not just in China but across the region as well.”

Speaking on behalf of the celebrities, Oscar nominated Hollywood movie star Andy Garcia said: “I’m sure I speak for all my fellow actors and entertainers from America that we are honoured to be here. I feel we’re not as distant as we might once have been and that there is an extraordinary relationship building with the people of China and its culture.

"I can guarantee you that I will take back to America some very fond memories and know that you will have an ambassador to China in America on my behalf and on behalf of my fellow entertainers.

The evening concluded with the Lan Kwai Fong Summer Love Party and prize giving ceremony where earlier in the day the team consisting of Kathleen Ekey, Song Ke, Zhao Xiao Shi and Wang You Xin claimed victory in the Celebrity / Pro-Am event.

The team was tied on a score of 61 with the team lead by the 2011 Open Championship winner Darren Clarke but eventually won on count back with 32 and 30 on the back nine respectively. Joining Darren Clarke in the runners up group was He Ping, Gary Lau, Andy Li and Simon Cooper.

For the professionals and celebrities it was a chance to familiarise themselves with the challenging terrain and unique volcanic features of the Blackstone Course before the start of the weekend’s 36 hole team and individual stableford tournament.

Previous news: Hainan Tears gets forest crusader Liu Futang into the wrong side of the law