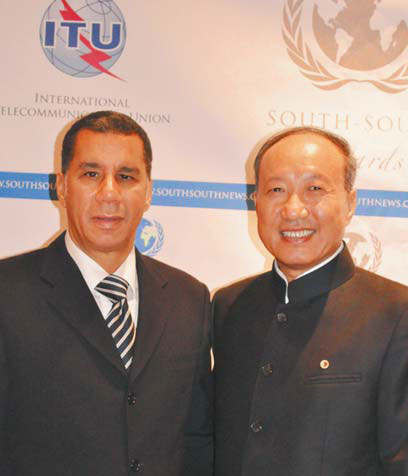 At a recent news conference held in the United States by the South-South Awards to honor HNA’s Brightness Action program, Chen Feng said he believes in the need "to do something for society" and that private enterprises should work with local government to do even more.

Chen, the founder and chairman of HNA Group, a large corporation with air transportation as its core business that also covers other industries in the tourism and service sectors, airport management, logistics, hotel management, retailing, finance and other related businesses, said he took philanthropy work as a priority when he founded it in 1993.

Chen was one of two Chinese people to be honored at the 2012 South-South Awards ceremony that took place on Sept 24 in Manhattan’s Waldorf Astoria. The Awards ceremony recognizes governments, organizations and individuals that have made significant contributions to address global development.

The HNA Brightness Action program has funded the treatment of more than 50,000 patients with cataracts in China, Cambodia, Inner Mongolia, Zimbabwe, Malawi and Mozambique in the last 10 years.

Han Demin, the superintendent of Beijing Tongren Hospital, was also honored for having treated more than 50,000 cataract patients extensively in Asia and Africa, with financial support from HNA. Hainan Airlines, a subsidiary of HNA, flew him and his team to treat patients who could not afford the medical expenses.

Han said in a statement that the HNA Brightness Action program demonstrates that China is ready to shoulder its social responsibility as an emerging power. He will continue to work for "the eradication of all preventable blindness by 2020".

Over the years, HNA has made donations valued at more than $100 million, supporting social programs and charitable works in the areas of assistance to the disadvantaged, disaster relief, education and environmental protection, among others. Last year, Chen launched the Cihang Foundation with an initial donation of 20 million yuan ($3.15 million) from HNA to offer resources for disaster relief, poverty alleviation, charitable aid and public assistance.

Chen said he does not equate philanthropy with wealth.

"It is about your heart. A person who donates his only dollar is doing more than a millionaire who contributes $500,000," said Chen. Today, HNA is a $16 billion international company. Hainan Airlines, the company’s flagship asset, is one of the leading carriers in China.

Last year, HNA acquired properties and assets around the world. It purchased the 165-room Cassa Hotel and Residences near New York’s Times Square for $126 million and a 23-story office building in Manhattan for $265 million, at 1180 Avenue of the Americas.

In Europe, the firm also acquired a chain of mid-range hotels and a cargo airliner. In August 2011, HNA, with Hong Kong-based Bravia Capital, bought a sea container leasing joint venture from General Electric for $2.5 billion.

In an interview, Chen said the financial crisis in the last few years has presented lots of opportunities for Chinese enterprises.

"China has reformed and opened up for 30 years. Now is the time for Chinese enterprises to go abroad – and the government has encouraged it," Chen said.

"HNA has made some investments in the US and Europe. This is just the beginning for us. This is also the beginning for China. In line with the country’s economic development, I believe more and more Chinese enterprises will go abroad."

In the second quarter of 2013, Hainan Airlines will launch a nonstop service with four weekly flights between Chicago and Beijing, a move that comes after the US Department of transportation approved the carrier’s application to provide the new service.

Hainan will be the first Chinese carrier to offer regular scheduled nonstop services between the two cities. Chicago will be the airline’s second destination in the US and third in North America. Hainan currently has flights to Seattle and Toronto.

Chen told reporters he hopes "to work toward opening up more routes between the US and China". The move comes at a time when the US government is beginning to relax its visa restrictions on Chinese citizens. Last year, US officials issued 34 percent more visas to Chinese tourists than in 2010.

Hainan will not just be competing against US airlines but increasingly with other Chinese airlines. In August 2011, China Eastern Airlines started its nonstop Shanghai-Honolulu flight service.

"We want to learn from other Chinese airlines that have operated longer than us. We hope to cooperate with them, not just compete with them. We should work together to develop China’s aviation industry," said Chen.