Will Hainan become surfing’s next frontier? 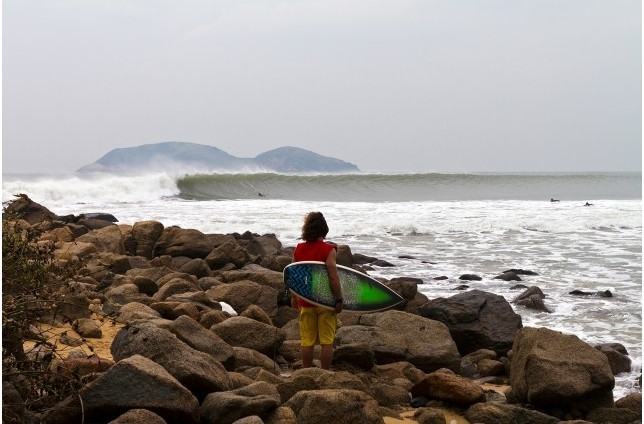 Despite having lineups like this in their backyard, the Chinese have yet to embrace surfing.
Off the coast of the South China Sea, on the island of Hainan, stands a 1,600-square-foot “surf facility” in an area the Chinese Government hopes will soon become a major surfing destination. The island, complete with its tropical climate, swooping beaches, and surprisingly hospitable lineups, has plenty of potential for fulfilling the government’s grandiose dreams of creating a “Chinese Waikiki.” There’s only one problem: currently there is no real surf scene in China. There are more than 1.3 billion people living in the country and only a few dozen of them call themselves surfers. But if the hopes of the Chinese government and a few major players in the surf industry come to fruition, all of that could potentially change.

In October of 2011, under the banner of the Swatch Girls Pro in Hainan, the ASP took a historical step for professional surfing when it sanctioned its first event in China. The announcement from the ASP was initially met with varying degrees of speculation that included some surfers taking issue with China’s checkered history with human rights violations, but come the conclusion of the contest, the widely accepted view was that professional surfing’s first venture into China had been a success. The figurative path had been cleared and in the coming months, the ASP would continue their venture into China yet again, holding the ISA China Cup and the 4-star Hainan Cup in January of this year.

"It’s probably fair to say that the factors contributing to this trend are both the desire to promote the growth of surfing in this region, as well as the region’s current economic strength,” says the ASP’s International Media Director, Dave Prodan. “This region, and particularly sponsors in this region, currently have the financing and interest to support these events and that’s what’s needed to get events off the ground.”

Despite a few successful contests marked by surprisingly good surf, the Chinese people are a long way from daily surf checks and building Fantasy Surfer squads. According to Brendan Sheridan, an American expat who’s been teaching surfing in the Middle Kingdom through his surf school, Surfing Hainan, since the mid-2000s, the current number of active surfers remains dismal. “When I got to Hainan in 2006, there were only one or two Chinese surfers. Now there are a good 25,” he says.

The lack of surfers, however, hasn’t deterred Sheridan and he remains confident that the sport still has the potential to take root in the nation. “I definitely foresee a thriving surf culture in Hainan and the rest of China,” he says. “Modern China loves cool Western imports, and you can’t get much cooler than surfing.” According to Sheridan, a number of cultural obstacles are currently standing in surfing’s way. “The Chinese people, especially the women, don’t want to get tan; a tan denotes that one works outside, which means they are a peasant. Many Chinese forgo outdoor activities in order to avoid making their skin darker. The other large cultural barrier is that China is not a very swim-savvy place. Even people who grow up on the coast rarely know how to swim well. People here are very apprehensive about getting into the ocean.”

The small community of surfers that do exist in Hainan doesn’t necessarily fit the mold of the typical locals. For Moyu Huang, one of Hainan’s most established surfers, the benefits of seeing the sport grow in his country are worth the potential of creating crowded lineups in the future. “I think the sport will grow just like skateboarding has,” he says. “I think that surfing advocates a simple lifestyle and it may help Chinese people abandon their materialistic approach and start to focus on enjoying life. It may also help Chinese people to realize how important it is to protect the environment—so many beaches are damaged by pollution in mainland China.”

In the eyes of Fernando Aguerre, president of the ISA—the organization that’s spearheaded the recent influx of contests to promote surfing in China—the future of surfing in the country holds great promise, especially considering its developing middle class. “Yes, China does not currently have much of a beach culture,” says Aguerre, “and consequently a very small surfing scene. But it does have great waves, and after decades of working hard to make a living, just like other nations in that area of the world, many Chinese now have a disposable income to enjoy life more. I really believe that surfing will be part of that new era in China, in which its citizens also want to enjoy themselves, much like the rest of the world does. I further believe that we are witnessing the start of a vibrant beach culture.”

In lockstep with his optimistic views on the future of surfing in China, the ISA has plans of holding another ASP-sanctioned event in Hainan in 2013.

"Last year, we organized the very first ISA China Cup, back to back with a 4-star ASP event,” added Aguerre. “Besides being the very first major surfing event in China, it was also the very first time the ISA ran an ASP event as part of a surfing festival. All stakeholders were very happy with the result, including the host nation, the local media, government and sponsors, the visiting surfers, the ASP, and Quiksilver who was the presenting sponsor. We’re going to run it again in 2013.”

Despite the recent success of competitive events in China, the hurdles of turning Hainan into Huntington are many. As a means to grow their brands outside of the relatively non-existent surf market, many surf brands have begun pushing the skate side of their operations with the hopes that surfing will continue to marinate and one day take shape.

In 2008, while the American economy was plunging, China was experiencing double-digit GDP growth. Seeing an opportunity to market their lifestyle to a budding economy, Vans put down roots in China by opening 11 stores in the country. In 2011, in an attempt to take advantage of China’s expansive online presence, Vans launched an online store at China’s TMall.com, the country’s equivalent of Amazon. At the time, China had an estimated 450 million Internet users—the most in the world—and more than 190 million online shoppers. With a primary focus on skate, Vans has seen their gamble pay off and they plan on expanding their retail presence even further, all the while hoping that a surf culture emerges.

"The skate market in China is growing, said Mitch Whitaker, the GM for Vans Asia. “But it’s still in a very nascent stage and will require support to continue to grow sustainably. Surf, on the other hand, is not really on the radar yet in China. It doesn’t necessarily connect culturally and for most Chinese, it’s a bit out of reach. That said, I do think the surf lifestyle has values that the Chinese aspire towards. The key will be how to make surf relevant to a population that has never been exposed to surf.”

With plans on expanding their presence into China, Billabong has followed on the same path as Vans by pushing their skate-oriented lines and brands with the hopes that surf will soon follow. “Currently, we’re seeing a growth within skate because that’s a natural fit for an urban environment, but as far as surf goes, we know that the sport isn’t quite thriving in the country yet. But we do believe that the lifestyle will catch on soon, and we’re planning for that as well,” said Ryan Teng, Billabong’s Asia Coordinator. “There are places in the Midwest where people don’t necessarily surf, but they’re into the lifestyle. As China adapts more to action sports, we expect to grow the surf brands more.”

Back on Hainan Island, the empty surf facility, which now doubles as a seafood restaurant, stands vigil over a beach void of surfers, lending to the realization that for as much potential as Hainan holds, the country is a long way from becoming a surfing nation. For now, China’s few existing surfers will continue on, hoping to share their lineups with not only surfers from around the world, but with their own countrymen. “I keep waiting for a Gladwellian tipping point,” says Hainan surf school instructor Brendan Sheridan, “but I’m just not sure when it will come. In the meantime I’ll just keep doing what I’ve been doing. Teaching people how to surf and organizing events to promote the sport and the lifestyle that I love.”

Next news: Drinking 3 cups of coffee a day may increase risk of vision loss