Jobs tight for new graduates amid slowing economy in China 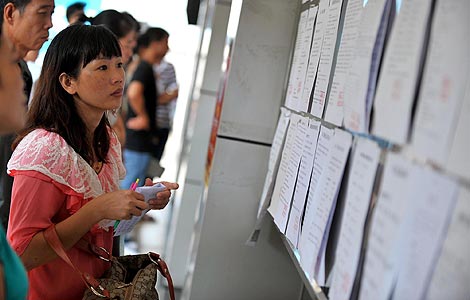 Job seekers look at employment information at a job fair in Haikou, South China’s Hainan province, Sept 26, 2012. [Photo/Xinhua]
China’s graduating seniors will be busy job hunting this fall, but they may find the process more difficult than in previous years as the country grapples with the sluggish world economy.

"I have slim hopes of finding my ideal job, because the company I am fond of only has 10 job openings this year," said Tian Taiji, a student in the Jilin University class of 2013, based in Changchun, capital of northeast China’s Jilin Province.

Tian said that he and his classmates are facing a grim employment situation this year.

"We have seen decreases in the number of new hires as well as in salaries," said Tian.

International rating agency Standard & Poor’s (S&P) lowered China’s economic growth forecast to 7.5 percent on Monday due to the slowdown in the world’s second-largest economy, the ongoing eurozone crisis and slower-than-expected recovery in the United States.

Analysts have pointed out that falling demand for labor coupled with a large number of graduates has led to the present employment pressure.

A recruiter with Inspur Group, the founder of China’s computer server industry, said that many companies have scaled down their recruitment plans this year, while some have even launched layoffs to ride out the economic downturn.

However, he said that outstanding graduates from prominent universities and those who have excelled in popular majors are not likely to be affected.

Statistics from the Ministry of Education show that the employment rate of postgraduates in China had been lower than that of undergraduates for three consecutive years as of 2009.

Although universities have expanded postgraduate enrollment in recent years, postgraduates do not have much of an edge on their peers who have not pursued a higher degree.

"Some positions, such as those in marketing or secretarial work, do not need graduates with higher degrees," said recruiters with Hisense Group, one of China’s leading IT product manufacturers.

This has led some postgraduate students to regret pursuing a higher degree.

"Even when I get a master’s degree, I will still have to worry about my future job. But my former college classmates who chose to find jobs after graduation already have stable jobs," said Wang Qian, a postgraduate student at Jilin University.

Graduates should adopt a pragmatic attitude toward job hunting, especially as they face a tough job market amid the present economic situation, said Zhong Xin, deputy director of the employment guidance center for graduates under Jilin University.