Fuzhou gives base to Hainan for Fuzhou Airlines

Updated: 2012-09-04 09:12:06
China typically runs its carriers by giving them a base they can develop into a hub where they account for the majority of traffic. Further loosening of that principle will occur in the private sector, where HNA and the Fuzhou City Government will form a joint-venture to launch Fuzhou Airlines in its namesake city, where privately-owned Xiamen Airlines currently represents 50% of capacity.

The launch comes as Xiamen Airlines, arguably the world’s most consistently profitable airline, worries if it is breaking the paramount rule of business in China: never be so successful so as to invite a covetous state. In the last two years Xiamen Airlines has posted double-digit operating margins. The creation of Fuzhou Airlines, along China’s more developed coastal area, is surprising given recent start-ups have tended to be in more developing regions.

Fuzhou Airlines was announced in Aug-2012 as a joint-venture but without information on shareholding, capital, launch date, route network or fleet type. Fuzhou, with a population of seven million, is the capital of Fujian province about half-way between Hong Kong and Shanghai.

Fuzhou is currently mainly served by Xiamen Airlines, based 118nm to the southwest at Xiamen, and which holds 57% of capacity for the week commencing 03-Sep-2012. Fuzhou is primarily a domestic airport; international flights account for only 12% of capacity and a significant share are to Hong Kong.
Fuzhou Airport international capacity by carrier (seats per week): 03-Sep-2012 to 09-Sep-2012 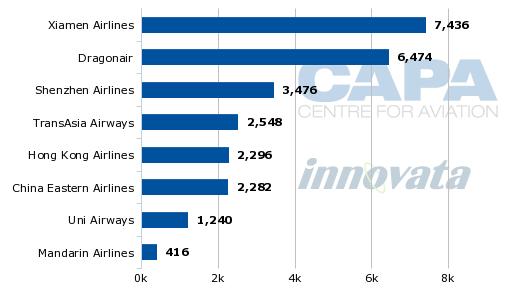 Source: CAPA – Centre for Aviation & Innovata
Fuzhou Airlines represents the first time a private carrier (or as private as is possible in Chinese aviation) will compete on a large scale with another private carrier to be the local carrier with a market-leading position.

The JV will also encompass, according to local reports, seven non-flying industries: airport industrial park; industrial funds; financial leasing; financial institutions; tourism culture; urban construction and industrial development; and a headquarters establishment. Many of these areas are tied to the larger HNA Group, which has large dealings in real estate, hotels and shipping industries.

The JV will also reportedly seek to invest in Fuzhou’s shipbuilding and shipping industry area while the tourism component will involve infrastructure projects including tourist resorts, luxury hotels and commercial real estate. Further infrastructure projects are possible for central business districts as well as industrial areas.

As with the larger HNA Group, although not opaque, it appears Fuzhou Airlines will be the flagship investment but profits will be derived far more in other areas. The JV for the airline could merely be a mechanism for the HNA Group to ingratiate itself in another area of Chinese business, notoriously difficult to break into independently.

Xiamen Airlines, to join SkyTeam in 2012, is a national carrier with strong profits
There is also mention Fuzhou Airlines will seek to deliver lower fares. It is unclear if this is typical new carrier promotion or if there is a subtle message that Xiamen Airlines has achieved too much and is in need of competition.

Despite a name tying it to one city, Xiamen Airlines has over 500,000 weekly seats. With just over 200,000 seats at Xiamen, the carrier does more flying outside of its namesake city than to or from, although Xiamen is its largest base. Along the way Xiamen has been impressively healthy on its balance sheet. This performance may have flagged the carrier could make room for competition with flow-on benefits.

Xiamen Airlines is less likely to able to claim special markets or tactics but rather the fundamental tactic of being an efficient carrier, a big ask in a country where state-owned carriers benefit from large demand and have not had to grease their business tactic wheels. Similar performance is seen at Spring Airlines, a low-cost carrier but bearing the critical trait of efficiency.

Xiamen Airlines will follow in the footsteps of part-owned China Southern by joining the SkyTeam alliance later in 2012.