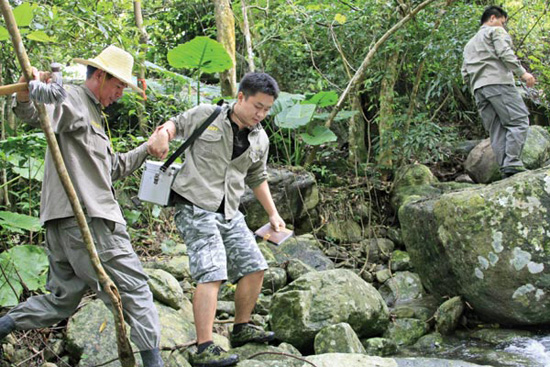 Workstation members at Hainan’s Yinggeling Natural Reserve trek in the tropical forest as part of a research project. (Huang Yiming / China Daily)
Hainan’s Yinggeling Natural Reserve is benefiting from a scientific research and management base built in the biologically diverse tropical forest, report Huang Yiming in Haikou and Liu Xiangrui in Beijing.

Unlike most of her classmates who competed to stay in the cities, Xu Biguo made her way directly from the city to the secluded mountains of Hainan province in 2007.

Xu, 28, is one of 27 college graduates, two with doctorates, who work at Hainan’s Yinggeling Natural Reserve and built a scientific research and management base out of virtually nothing over the past five years.

It is regarded as the "lungs" of the island province, whose two largest rivers originate there. Its biologically diverse tropical forest is the largest of its kind in China.

The Hainan Bureau of Forestry decided to establish a workstation in the reserve and started to recruit graduates from universities around the country in 2007.

Majoring in ornamental horticulture at university, Xu, who found the work not far from her hometown, applied and became one of the six "early arrivals".

"I had worries before I came. And to be honest, I was a little disappointed when I first got here," Xu says. "I expected an office building at least."

Both the working and living environments were tough in the beginning, Xu recalls.

The station was paid for from the provincial government’s allocation fund for the ecological forest in the reserve.

However, due to insufficient funds, there were just two simple dormitories and thatched houses were rented from farmers to provide accommodation.

Xu is responsible for administrative work, but due to a shortage of hands she also prepares food and tents for colleagues and takes care of the facilities.

"I’m the ‘housekeeper’ and do practically everything," Xu explains.

Average income is less than 2,000 yuan ($315) a month, though Xu earns slightly more because she is senior.

For some young members, living and working in such an environment can mean both physical and mental challenges.

Wang Hesheng, who graduated as an insect classification major, was attracted to the reserve because of its biological diversity, in 2007. The young man often spends days in the forests observing insects.

For him, mosquito and other insect bites, and snake attacks, are common threats in the tropical forests.

One time, when he was recording insects, a snake’s head jutted out from behind a branch. He immediately stopped moving, knowing snakes have poor hearing but are sensitive when it comes to smell and movement. He stood still for a minute.

"I was able to get away from the snake safely. But I was scared when I found out that there were leeches on my legs," he says.

"My colleagues are all well disciplined. So I am more nervous if there is rain or a typhoon holding up research teams from returning," says Huang Guochang, the head of the workstation.

"Often there are no phone signals in the mountains when it rains and we lose contact with them."

Isolation is a test for the members as the nearest county town is 30 km away and they may not have TV or even a phone signal.

Xu says female colleagues sometimes complain about homesickness. "Sometimes we joke that we have devoted our youth to Yinggeling."

Compared with colleagues from inland provinces, Xu has an advantage, with her hometown in nearby Qionghai. But she hardly has time to go there.

Xu has met with occasional opposition from her family, who advised her to work in a more convenient place. But Xu confides the five-year plan laid out by the first station head gave her confidence for the future.

"Now all things in the plan have been realized, step by step," says the woman, who married this year and will soon be a mother.

"I won’t regret my choice. I’m proud to do something for environmental protection, though I earn less and have a less colorful life here than in the cities."

The group has welcomed new members during the years, but all share a harmonious relationship.

"We don’t feel lonely because we have so many young people who share the same goals. That’s why we have stayed," says Liao Changle, who joined the group in 2010.

"We keep talking and joking with teammates on our way to work in the mountains. I love this job and find my life rather substantial," Liao says.

After five years of efforts, their station has finished an important biology archive project, with a number of rare and protected animals and plants recorded.

Personal achievements are notable, too. Having scaled all peaks in the reserve, Wang has sorted out a series of new insect genuses and published his thesis in one of the nation’s A-list scientific journals. Liao, meanwhile, has done systematic research on the Yinggeling tree frog.

Nearby residents used to depend heavily on natural resources, a big threat for the tropical forest in Yinggeling.

Now, station members are working hard to change the situation. To make friends with locals, mostly from the Li ethnic group, they frequently visit villages and drink with them. Xu’s ability with the local dialect has allowed her to promote forest protection.

In response, more than 270 villagers have become forest rangers.

Meanwhile, the workstation is receiving considerable attention. In May, the group received the May Fourth Medal – the highest honor for youth by the Central Committee of the Communist Youth League and the All-China Youth Federation.

The provincial authorities have also named them as youth models.

Recent media coverage has not only made their stories widely known to the public, but also inspired other young college graduates to share the same dream.

More than 200 college students have shown an interest in joining them. Some even gave up offers with higher salaries. "Besides scientific researchers, we are going to build a more diverse team with different talents in the future," says Huang, the station head.

english.peopledaily.com.cn
Editorial Message
This site contains materials from other clearly stated media sources for the purpose of discussion stimulation and content enrichment among our members only.
whatsonsanya.com does not necessarily endorse their views or the accuracy of their content. For copyright infringement issues please contact editor@whatsonsanya.com

Previous news: A grand expo of ink art from Hainan province is being held in Beijing