Hainan is convict island during ancient China, see it in Lord Su’s legacy 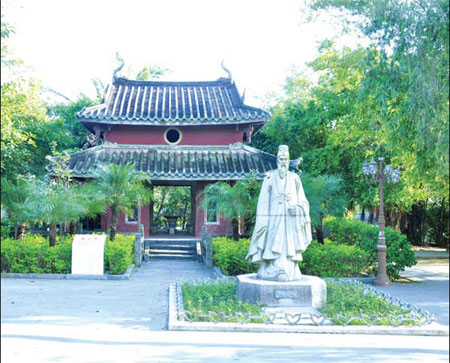 Lord Su Pavilion is one of the monuments that reflect the respect for the poet and statesman. (Li Qingman / for China Daily)
The Americans have a saying that you can take the boy out of the country, but you can’t take the country out of the boy. In the story of Chinese poet Su Shi (1037-1101), it was the boy who seemed to make the countryside.

Like all scholars of ancient China, Su Shi, a.k.a. Su Dongpo, wanted to channel his knowledge into a career in officialdom.

But he did not fare so well as a public servant because feudal bureaucrats were supposed to lord over the people, not serve them. Those intent on doing good tended to fall victim to palace intrigue.

In 1097, Su was demoted and exiled to a post in Hainan Island. On route, he stayed in a temple to the west of Leizhou near the island. The natural beauty and the monotone of the temple drums and prayers had a calming effect on him. He put aside his own misfortune and wielded a brush on a plaque.

"Top of ten thousand mountains" was his eulogy of the place. Today it is the best-known calligraphy in Leizhou.

Su also rowed a boat in a local lake. It had been called Luo Lake, but since the West Lake of Hangzhou was so closely associated with him, locals renamed it West Lake.

Before Su went to Leizhou, he was once a senior official in Hangzhou, where his greatest contribution was dredging the West Lake, making it one of the nation’s most popular attractions since the Song Dynasty (960-1279).

Mud and silt taken from the lake was used to build an embankment, which was later called Su Causeway.

The lake in Leizhou, which was also located to the west of the town, was so renamed to show local respect for Su. As a matter of fact, there are a dozen West Lakes around China, most of which were named in Su Shi’s memory.

West Lake in Leizhou has a Lord Su Pavilion. A tour guide told me a stretch of embankment is called the Su Causeway, "just as in Hangzhou".

Su stayed a night at a local village and dreamed of his hometown. Later, the place was re-christened Dongpo Ridge.

Su again passed through Leizhou on his way back from Hainan after he was pardoned by the emperor. Bad weather held him for 40 days in Xinglian village. He was amazed by its civility and praised it as "a place of natural splendor and civilized manners". Later, a school was built, borrowing Su’s descriptive word (civilized) as its name.

In the old days, Leizhou was so far away from the capital city that it was usually governed by officials who had fallen from favor. Ironically, their dedication proved to be a blessing for the locals.

Emperors have long since faded away, but the literary luminary Su Shi remains a living legacy in a place then considered remote from civilization.

SOURCE: english.people.com.cn
Editorial Message
This site contains materials from other clearly stated media sources for the purpose of discussion stimulation and content enrichment among our members only.
whatsonsanya.com does not necessarily endorse their views or the accuracy of their content. For copyright infringement issues please contact editor@whatsonsanya.com

Next news: More meteorologist monitoring stations to be built on Sansha City