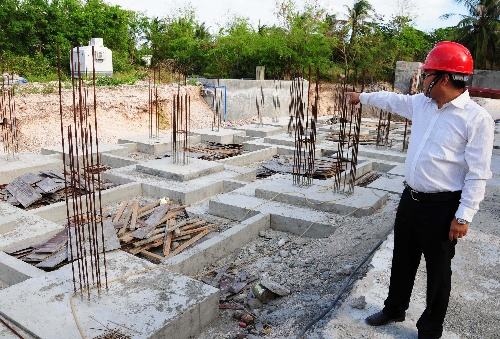 A project on water disposal, recycling and garbage collection was launched Saturday in Sansha, Hainan Province, the frontier city that aims to strengthen China's sovereignty of the South China Sea.

Such moves are very important to protecting the environment of Sansha and improving the living conditions of military forces, police and residents in the city, a Sansha official was quoted as saying, adding that they also benefited the sustainable development and stability of the city.

The city, formally established in July, will gain its first sewage and rubbish disposal systems within a year.

The recycled water will be used for sanitation, watering, construction and firefighting. Additionally, one garbage transfer station and six garbage collecting points will be set up on Yongxing Island in the city and six more in Sansha's six other islands.

Upon completion, all rubbish will be classified and sent to the station for compression and then sent to Hainan Island for further disposal. At full operation, all daily garbage on the island will be cleaned up and processed within a day.

"A modern city should have such facilities to maintain normal operation," Dong Liming, a professor with the College of Environmental Sciences and Engineering at Peking University, told the Global Times. "Establishing infrastructure should be conducted earlier for tailoring an ecological and tourism city like Sansha."

However, Du Jifeng, a professor with the Institute of Asia-Pacific Studies at the Chinese Academy of Social Sciences, thought the project was not as urgent as building houses and getting a steady water supply, which the city currently lacks.

The city, the smallest in China with a population of 600, was formally established in July. It covers Xisha, Nansha and Zhongsha islands and their related waters. The city is one of two in the province highlighted to be built as models for a maritime economy, according to Liu Cigui, president of State Oceanic Administration.

The Xinhua News Agency launched its Sansha bureau office on Saturday. A power company will also start operation this week, according to China News Service.