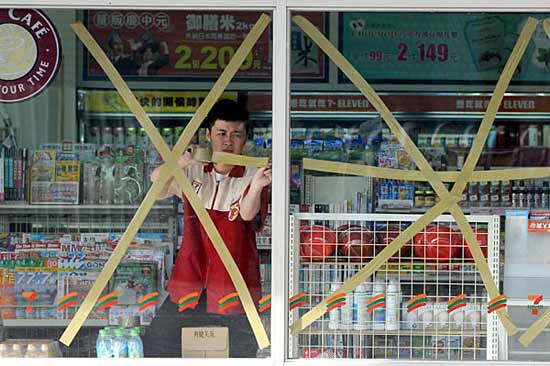 A worker tapes the window of a convenience store in Hualien, Taiwan province, on Wednesday, in preparation for typhoon Tembin. (Photo/China Daily)
Two powerful typhoons are heading toward China, putting the weather-beaten nation on alert again after four storms have caused landfalls across the country since the start of August.

"Typhoons Tembin and Bolaven may have a combined impact on coastal areas in the coming 10 days," Zhang Chang’an, chief forecaster at the China Meteorological Administration, said on Wednesday.

Both storms are strengthening, with Bolaven expected to be the strongest typhoon to hit China this year if it lands in the country, Zhang said, adding that the storm will bring maximum winds of 220 km/h.

Tembin was about 2,000 km from the coast of Zhejiang province on Wednesday, moving at a speed of 5 km/h.

The administration has asked authorities in potential affected areas to set up warning signs in high-risk areas such as construction sites and low-lying areas, and open emergency shelters including schools and stadiums for evacuation of affected people.

The Fujian Meteorological Bureau urged boats to take shelter in ports by Wednesday to avoid possible damage brought by Tembin.

Tembin, expected to be the fifth storm to hit China this summer, is expected to sweep across Taiwan on Thursday and continue toward the mainland, bringing rainstorms to Fujian and Guangdong provinces by the end of the week, according to the administration’s Shanghai Typhoon Institute.

Bolaven is expected to bring torrential rain and strong winds to Shanghai and Zhejiang, Jiangsu, Shandong, Liaoning and Jilin provinces between Aug 27 and 29, the administration said.

Zhang said satellite images show Bolaven will become the strongest typhoon formed in this typhoon season, which may cause catastrophic damage.

The previous typhoon – Kai-Tak – claimed three lives and one person is still missing, with nearly 3 million people affected in the Guangxi Zhuang autonomous region by Tuesday, according to the region’s civil affairs bureau.

Since the start of August, three other typhoons, Saola, Damrey and Haikui, caused landfalls in China. That means the country could be hit by six typhoons in August, exceeding the record high five storms in 1994 and 1995.

So far, 15 tropical storms have formed in the Western Pacific this year, two more than the average number in the same period for the past two decades.