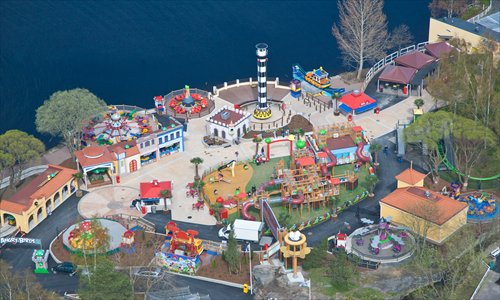 The first Angry Birds theme park in Finland. (Photo:Global Times/ Courtesy of Lappset Group )
"Life is like Angry Birds. When you fail, there will always be laughter from several pigs," a popular Sina Weibo post states. Widely recirculated, this saying is inspired from Angry Birds, a game where players catapult birds from slingshots to smash pigs.

The game, based on the story of birds taking revenge against pigs for stealing their eggs, was developed by Rovio Entertainment in 2009, gaining international acclaim.

Domestically, the number of downloads for the game has exceeded 140 million, making China the second largest market for the Finish company.

Rovio opened its first overseas office in Shanghai this June, aiming to develop the Chinese market. It also plans to open hundreds of retail stores across China, as reported.

Now, it is considering opening theme parks in China, to gain a slice of the Chinese tourism market. But this is a decision that requires careful execution, much like the Angry Birds game itself.

From virtual to reality

Rovio’s co-founder reportedly visited Hainan Province earlier this month to research and find a "nest" to build the theme park, reported Hainan Daily. In June, Peter Vesterbacka, the co-founder of the Angry Birds game, announced in Shanghai that the first Angry Birds theme park will be built in Haining, Zhejiang Province.

Rovio has similar plans in Shanghai, Dalian, Chongqing and other cities.

"We plan to build many Angry Birds activity parks in China though we do not have a fixed schedule or number yet," Chen said. "We want to bring the Angry Birds experience to fans all over China and all over the world."

With the popularity of Angry Birds, Rovio has expanded its business beyond games to toys, films, books, clothing and theme parks. It built its first Angry Birds theme park in Tampere, Finland last April.

Sundown Adventureland in the UK will open its Angry Birds Park on August 29, the first Angry Birds Activity Park in the UK. In addition, an indoor park will be constructed in Vuokatti, Finland, opening before the end of the year.

"It’s natural that Angry Birds wants to tap into China’s theme parks," said Xie Yifeng, an expert in tourism and real estate. "The market is huge, and local governments are supportive."

Vesterbacka once said that Rovio aims to become a leading entertainment brand in China, like Disney. Both Disney and Rovio use games to build popularity and develop derivative products to make a profit. They both understand how valuable the Chinese market is.

After opening a theme park in Hong Kong in 2005, Disney is planning on opening its second theme park in China in Shanghai around 2015.

But if Angry Birds moves fast, it might be the first exported theme park in the Chinese mainland.

Vesterbacka revealed in February that a theme park focusing on games would be built in Shanghai by the end of the year.

"Visitors will not play passively in the park… People will move as if in a game. It is different from Disney."

Vesterbacka’s philosophy is to tailor parks to the neighborhood, in manner of a school, grocery store or library.

"Angry Birds theme parks [encourage] exercise. There will be traditional rides and roller coasters available, but the core idea of an Angry Birds parks is to activate people to move and go through extreme experiences instead of standing in queue," wrote Ylinenp?? in an e-mail.

In an interview with Xinhua, Vesterbacka said the company hopes to incorporate traditional Chinese fairy tales into future theme parks.

Chen is confident in the uniqueness of Angry Birds theme parks. "We don’t feel that we are competing with local and foreign brands, as our parks will provide a different and unique interactive experience."

Some experts say Rovio has a long way to go.

Xie Yifeng said, "Though it [Angry Birds] has certain influence as a brand now, it is not comparable to Disney yet," he said, "It needs more development."

Many theme parks in China have not done well. The first theme park emerged in 1989 when Splendid China was opened in Shenzhen.

There are reportedly an estimated 2,500 theme parks across the country, but only a tenth make a profit.

Bao Jigang, a professor at Sun Yat-sen University, said that most parks in China have similar themes and expensive tickets.

There are at least 500 parks with the Journey to the West theme and dozens of folk culture villages across the country.

"Angry Birds has its own brand and is developing its chain products," Xie Yifeng told the Global Times.

Ylinenp?? is optimistic. "China is an engine in the world’s economy. The same is happening … with theme parks."

Xie recommends Rovio and its partners conduct thorough research about the theme park market in China.

"Design and function should integrate the special features of China," he said. Xie said local governments should do research before embarking on foreign projects.

"Local governments are eager to drive the economy and scramble for theme park projects while China is a market not to be neglected."

SOURCE: People’s Daily Online
Editorial Message
This site contains materials from other clearly stated media sources for the purpose of discussion stimulation and content enrichment among our members only. whatsonsanya.com does not necessarily endorse their views or the accuracy of their content. For copyright infringement issues please contact editor@whatsonsanya.com