To the North of Hainan, Zhanjiang is where diverse cultures converged 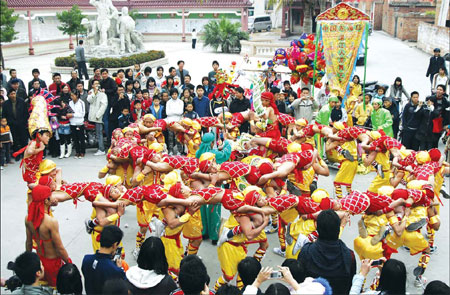 The dragon dance, also called the "human dragon", is a popular cultural tradition from Zhanjiang. Unlike the more commonly known version in which costumed performers hold an elongated prop in the shape of a dragon, the Zhanjiang version does not have a prop dragon but uses young boys to connect each adult.
Coastal melting pot features colorful traditions of various ethnic groups

Zhanjiang is a prefecture-level city in the southwestern part of Guangdong province.

It stretches 12,490 square kilometers to cover the Leizhou Peninsula, forming the southernmost tip of the Chinese mainland. It neighbors Hainan province and the Guangxi Zhuang autonomous region.

Culturally speaking, Zhanjiang’s distinctive features set it apart from the dominant Cantonese culture of the province. For one thing, much of its population of more than 7 million are descendants of migrants from Fujian, a province to the far east of Guangdong, and this is borne out by the similarity between the local dialect and Fujian’s Minnan dialect.

Here, one can find the same tall palm trees, stretches of sandy beaches and breathtaking ocean views that are commonplace in Hainan. But you will also encounter a French-style mansion that used to be home to a French envoy. Like Guangzhou, it was an open port in the late Qing Dynasty (1644-1911) that had seen booming trade.

Volcanic eruptions millions of years ago brought with them minerals that turned the earth here red. It is covered with lush greenery and encircled by long coastlines that mark the boundary of a deep blue sea.

Much in the same way that these three contrasting colors meet here, this place has been the site of the convergence of many ethnic cultures – the Fujianese from the east, the Han from the north and the half-dozen indigenous ethnicities, who were the earliest settlers and now form officially recognized ethnic groups.

This gave rise to a rich diversity rare in other parts of Guangdong. If one were to study some of the vast number of intangible cultural heritage projects from Zhanjiang, one would realize the unique wonders of this place.

Suixi Lion Dance is one of seven State-level heritages. Sure, there are lion dances all across the country, with the northern style more masculine and the southern more adroit.

The Suixi style incorporates martial arts moves from Fujian, with two performers working together. The front man holds the lion’s head and the one at the back holds the front performer’s waist.

There is a ritual with the lion dance. Performers pray and burn incense before their newly finished lions. A village elder oversees the ceremony, first offering wine as tribute to the lions.

Then, the elder uses a long sleeve or brush to wipe the lion’s head and back and ties a red ribbon for decoration before putting a final touch of golden powder on the lion’s eyes. The lions assume a life of their own and can start strutting their furry majesty around.

The most difficult movements for a lion dance are on a three-meter pole. Actually the floor is dotted with 20 such poles and the two performers for each lion have to jump from one to another while keeping the balance and adhering to the pace of the drum.

Other acrobatic elements, such as jumping through burning rings, have also wowed foreign and domestic audiences, winning many prizes in the process.

Another popular heritage item from Zhanjiang is the dragon dance, called the "human dragon". Unlike the often seen version with costumed performers holding an elongated prop in the shape of a dragon, the Zhanjiang version does not have a prop dragon, but uses young boys to connect each adult.

Specifically, a boy places his legs on the shoulders of the adult in front of him, wrapping his legs around the adult’s arms, and then he would lie backward and put his head on the right shoulder of the next adult and wrap his hands around that adult’s neck.

The boys must not wear shoes, and practices are usually held in places where an inadvertent fall of a boy would not hurt him, such as a beach. The first adult of the procession has two additional boys attached to him – one sitting on his shoulders and the other strapped to his chest.

Because coordination is crucial, the performers tend to hail from the same village. In performance, they display a kind of dexterity and nobility only the human body can impart.

The culture of Zhanjiang is multifaceted with many new twists for things one may take for granted. It is a peninsula that may seem familiar, yet it will yield new discoveries.

Previous news: Hainan woman burned to death by sons after ‘wizard’ claims her to be a demon