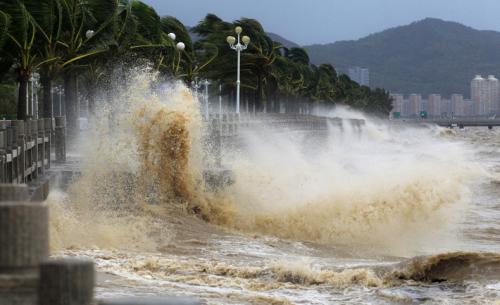 Gales, torrential rains and huge waves pounded coastal areas in Guangdong and Hainan provinces and the Guangxi Zhuang autonomous region as Typhoon Kai-Tak made landfall in Guangdong on Friday.

Kai-Tak, the most powerful typhoon in recent years, landed in Huguang town, Zhanjiang, at 12:30 pm with a wind speed at its center of up to 38 meters per second, according to the Guangdong Provincial Meteorological Observatory.

High waves submerged some sea dikes and paddy fields, according to Zhanjiang Daily.

Some shrimp and sugar-cane farms and other low-lying parts of the city were flooded, resulting in major losses.

The South China Sea Forecast Center of the State Oceanic Administration issued red alerts about sea waves and stormy tides on Friday morning. The red alert is the highest in the country’s four-tier color-coded weather warning system, and the maximum warnings were the first the center has issued this year.

Eleven fishermen on the fishing boat Yuedianyu 53018 who were stranded in the Bohe Harbor in Maoming, Guangdong, on Thursday when their engine failed, were rescued on Friday, provincial officials said.

Fallen trees blocked some roads, and all bus service in the urban areas of Zhanjiang was suspended. In the city, some billboards were peeled off, electric poles fell and trees were uprooted.

Work at all the property development and road construction sites in Zhanjiang was suspended.

Rain forced its way through closed windows into some apartments, and the water supply to residents on high floors on Kangning Road in Zhanjiang was disrupted, as Kai-Tak disrupted electric service.

Shipping services crossing the Qiongzhou Strait, linking the island province of Hainan and Guangdong, were suspended, with about 32,000 passengers and more than 4,000 vehicles stranded in Zhanjiang at 3 pm.

A man surnamed Ke from Zhanjiang and working in Hainan, had waited longer at the Xiuying Harbor in Haikou for the resumption of the ferry service across the Qiongzhou Strait, compared with the situation in the previous typhoon.

Not many passengers stayed at the harbor on Friday because many had returned their tickets, not knowing when the service would resume.

Meanwhile, sales of tickets for the Wuhan-Shenzhen high-speed trains, as well as presale of tickets for trains from Guangzhou to Shenzhen, Zhuhai and Hong Kong, were suspended.

Some tourist groups bound for beaches and islands in Guangdong and Hainan were postponed.

In Hainan, many train services were suspended and flights canceled, with many roads in the resort city of Sanya seriously flooded.

Hu Yongchang, 65, in Beihai, Guangxi, said Kai-Tak is the most serious typhoon he has seen in Beihai. "I dared not go out today. I heard tree branches were blown away. Flooding as high as 30 cm was at the entrance of our community."

Before Kai-Tak landed, people living in flood-prone areas were evacuated and fishing boats called back into harbors in Guangdong, Guangxi and Hainan.

On Hengqin Island, in Zhuhai, Guangdong, more than 12,000 workers at constructions sites were relocated.

In Foshan, Guangdong, more than 3,000 trees, including some uprooted by Typhoon Vicente last month, were fastened.

Moderate to heavy rains were forecast in western Guangdong for Saturday.

Next news: 23 flights canceled, 18 delayed at Sanya Airport due to Typhoon Kai-Tak