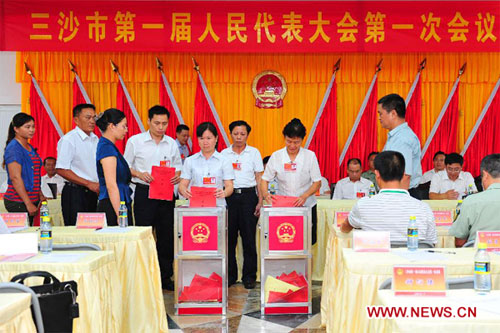 Representatives cast their votes in the first session of the first Sansha Municipal People’s Congress held on Yongxing Island, the government seat of Sansha City, in south China’s Hainan province, July 23, 2012. [Photo: Xinhua]
Since the start of August, Washington has found itself increasingly more involved in the territorial disputes of the South China Sea, be it intentional or otherwise, due to comments which have ruffled feathers within the Chinese government.
The rising of the flag at Sansha municipality, on Yongxing island located within the disputed area some 200 miles from Hainan, equipped with its own military garrison, led to the U.S. State Department releasing a statement in which Beijing’s actions were singled out as being damaging to the stability of the region.
On August 3, Patrick Ventrell, acting deputy spokesperson at the State Department said that the city and garrison "run counter to collaborative diplomatic efforts to resolve differences and risk further escalating tensions in the region." The statement has since been followed by further comments from the State Department which risk straining Sino-American relations further. With China on the alert, believing that the U.S. has taken sides in the dispute, the need for clarity regarding U.S. policy within the region is now needed more than ever in order to prevent more forceful displays of assertiveness.
Patrick Ventrell had initially stated that the U.S. does "not take a position on the competing territorial claims and (has) no territorial ambitions in the South China Sea." However, the criticism of Chinese actions over those of Vietnam or the Philippines, alongside the repeated claim that the U.S. has no territorial ambitions within the region, has been interpreted by the Chinese government as an explicit affront to China whereby the U.S. is seeking to contain China’s rise by apparently taking sides in the dispute.
Chinese Assistant Foreign Minister, Zhang Kunsheng said the remarks "disregarded the facts, confused right with wrong, sent a seriously wrong signal and did not help with efforts by relevant parties to maintain peace and stability in the South China Sea or the Asia Pacific"

On August 14, the U.S. State Department once again weighed in on the issue as part of a daily briefing by spokeswoman Victoria Nuland. Commenting on Under Secretary Wendy Sherman’s recent visit to Beijing, and in relation to Beijing’s preference for a bilateral approach to the territorial disputes in the area, Nuland stated, "if bilateral diplomacy can be supportive of an ultimate, multilateral framework, then that will be fine; but we don’t think that cutting deals with these countries individually is going to work, let alone be the expedient way or the best way under international law to get this done."

Nuland spoke out against pursuing bilateral talks in an effort to "divide and conquer and end up with a competitive situation among the different claimants." However, Nuland did not go as far as saying that the U.S. suspects China of carrying out such a strategy. Nonetheless, the comments from the State Department may have undermined Washington’s continued calls for a common consensus and a code of conduct based on the principles of international law, as China observers call foul and see the comments as evidence of tacit support for competing claimants.

China’s gripe comes from the fact that Vietnam has leased exploration blocks in contested waters, while the Philippines are attempting to do likewise; though America chose not to censure either nation publicly.

Furthermore, state media reports have claimed that Beijing’s moves in relation to Sansha came in response to the actions of China’s neighbors, including a new law requiring all foreign ships passing through the disputed area to notify Vietnamese authorities. These claims seem to confirm what was said in a report published in July by the International Crisis Group (ICG), entitled "Stirring up the South China Sea: Regional Responses".
The report noted that, "Beijing has become more reactive, pushing back on perceived provocations to an extent that the other party loses some sort of control it had in the disputed area, while China claims that it did not trigger the incident."

The fervently patriotic stance of the country’s press also adds fuel to the fire, as they have been keen to jump on the State Department’s comments in defense of China’s territorial claims, which in turn whips up nationalist sentiment among the population. The situation is being further intensified by the robust character of certain nations, emboldened by the presence of the U.S. within the region following its "pivot" towards Asia.

The ICG report mentioned above alludes to this fact, noting that "China is not stoking tensions on its own. South East Asian claimants are now more forcefully defending their claims- and enlisting outside allies- with considerable energy." Specifically, the report notes that "Vietnam and the Philippines in particular are seeking to increase their leverage over China by internationalizing the issue." While China remains unhappy with the comments from the State Department, it is fair to say that officials within Vietnam and the Philippines will be welcoming this and further U.S. input on the issue.

Douglas H. Paal, vice president for studies at the Carnegie Endowment for International Peace, notes that, "The overriding strategic objective of the United States in Asia is to manage China’s rise – which appears inevitable – in ways that do not diminish vital American interests in the region." Paal goes on to state, "Judging from the outrage coming from China at being singled out, after Vietnam and the Philippines had taken steps without being criticized to secure resources in the contested seas before China’s own actions, the U.S. statement seems to be backfiring."

China’s nine-dotted line lays claim to some 80 percent of the South China Sea, but has been dismissed by some observers due to the fact that the boundary is loosely defined and has been formulated and altered on the basis of historical assertions.

Nonetheless, the recent U.S. input on the matter may have made the task of managing territorial claims even more difficult as the Chinese government will look to forge ahead with bilateral diplomacy rather than shifting towards an approach endorsed by the U.S. Douglas Paal has astutely pointed out that Asian societies are accustomed to living with unresolved disputes for centuries at a time. In light of this, Paal suggests, "The U.S. would do well to adhere to principled positions it has already articulated, and stand for a process that is fair to all disputants and those who will be affected at the margins."

Commentaries on this issue all boil down to the notion that the pressure is constantly being ratcheted up, though the possibility of conflict remains low due to the fact that the losses which would result far outweigh any possible gains. Conflict would serve to damage trade between the nations involved, and from a Chinese perspective, it would also destroy the thesis of China’s peaceful rise while boosting support for the U.S.

Unfortunately, it appears that the State Department’s comments will only serve to add more pressure to the growing levels of anxiety during an election year in which relations between America and China are set to be sorely tested as a result of electioneering tactics.
SOURCE: CRI

Next news: Typhoon Kai-Tak is to lash Guangdong, flood warning in Hainan