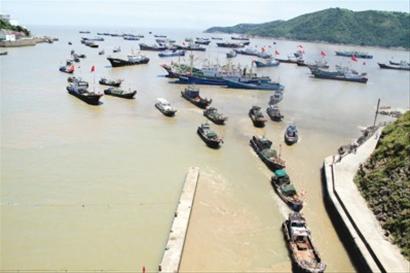 The NMC said that Haikui has entered the eastern part of the East China Sea around 5 p.m. and is moving northwestward at 15 kilometers per hour.

The Zhejiang Provincial Flood Control and Drought Relief Headquarters issued a level four emergency response to the typhoon in the morning and released a notice in the afternoon asking the flood relief and water conservancy departments at all levels in the province to make full preparation against the typhoon.

The notice also said that Haikui, which is strong and moving at a fast speed, will probably make landfalls in the central part of the coastal area of the province.

Heavy rains will hit many areas in south and east China from Sunday to Tuesday, as Haikui approaches the mainland while stormy weather caused by dual typhoons, Saola and Damrey, continues to affect China’s coastal regions, according to the NMC.

Downpours will sweep parts of Guizhou, Yunnan, Guangdong and Hainan provinces and the Guangxi Zhuang autonomous region, as well as southern parts of some central and northern provinces over the next few days.

Meanwhile, rainstorms are expected to lash east China’s coastal regions including Zhejiang and Jiangsu provinces and Shanghai municipality on Monday and Tuesday, according to the NMC.

Before the approaching Haikui, typhoons Damrey and Saola, which made landfalls in east China on Friday, had caused severe and widespread damage in seven, mostly coastal provinces in China, according to a statement from the National Commission for Disaster Reduction and the Ministry of Civil Affairs on Sunday.

The typhoons had left eight people dead and eight missing and forced the evacuation of about 1.3 million residents in provinces of Jiangsu, Zhejiang, Fujian, Jiangxi, Shandong, Hebei and Liaoning as of 9 a.m. Sunday, according to the statement.