China is ready to work with ASEAN countries- Qin Gang 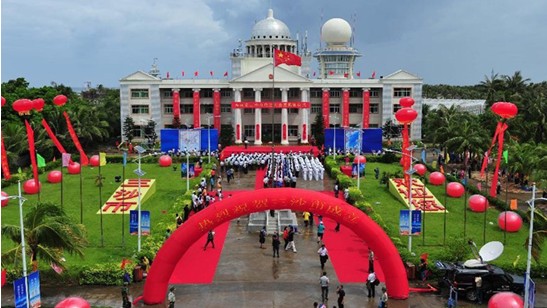 A ceremony is held to mark the establishment of Sansha city on the Yongxing Island in China’s southernmost province of Hainan, July 24, 2012. The Yongxing Island is part of the Xisha Islands in the South China Sea. Photo: Xinhua
China has voiced strong dissatisfaction after the US on Friday issued a statement regarding the South China Sea, which singled out Beijing for criticism over its establishment of Sansha city and its associated garrison.

The US statement ignored the facts and sent a totally inaccurate signal, which is not conducive to the efforts being made to safeguard the peace and stability of the South China Sea and even the Asia Pacific region, Chinese foreign ministry spokesperson Qin Gang said in a statement published Saturday.

"China expresses strong dissatisfaction and resolute opposition toward this," it read.

In the press statement from the US State Department, Washington voiced its concerns over the increase in tensions in the South China Sea, directing its criticism towards China’s recent efforts to safeguard its national interests.

"China’s upgrading of the administrative level of Sansha city and establishment of a new military garrison there covering disputed areas of the South China Sea run counter to collaborative diplomatic efforts to resolve difference and risk further escalating tensions in the region," read the statement.

It claimed that the US has "no territorial ambitions" in the waters.

"The statement aims to exert pressure on China," said Zhang Yunling, director of the Institute for International Studies under the Chinese Academy of Social Sciences.

"Though the intention of establishing the garrison in Sansha is more symbolic, the US still fears that military conflicts will emerge in this region, during which it would forcibly interfere," Zhang told the Global Times.

In response to the accusations, China reiterated its indisputable sovereignty over the Nansha Islands and their adjacent waters by demonstrating ample historical basis for its claims.

China set up offices in 1959 in the Xisha, Nansha and Zhongsha islands, which were affiliated with Guangdong Province, in order to administer the islands and the adjacent waters, said Qin.

In protest against the US interference, Chinese Assistant Foreign Minister Zhang Kunsheng summoned Robert S. Wang, the deputy chief of mission of the US embassy in Beijing on Saturday, to lodge solemn representations, asking Wang to report China’s stance to top US authorities.

The US embassy in China could not be reached for comments as of press time.

Meanwhile, Qin said the US has been practicing a "selective blindness" by citing a series of recent provocations stirred up by other countries.

The Philippines opened bidding for exploration of three oil and gas blocks in the South China Sea on July 31, attracting six companies, but only one was from outside the country.

"The US’ obviously biased statement has indicated its backing for countries such as the Philippines and Vietnam, which will further complicate the regional situation as these nations will not feel they need to show restraint during conflicts," said Gao Zugui, a professor at the Institute for International Strategic Studies at the Party School of the CPC Central Committee.

Zhang echoed Gao, saying the US is taking advantage of the complicated situation to enhance its presence in the region.

Zhang said that under the backdrop of persistent US meddling, the key to solving the dispute lies in the fact that China and the ASEAN nations could create an environment for a political solution to the disputes by virtue of their own strengths.

China is ready to work with ASEAN countries to eliminate disturbances and further promote the development of the bilateral strategic partnership, Qin said.

Previous news: Sansha, China’s most tranquil outpost is the most heated spot

Next news: US calls to lower tension, turns blind eye on real facts