HomeNews & Social MediaHainan NewsSansha, China’s most tranquil outpost is the most heated spot

Sansha, China’s most tranquil outpost is the most heated spot 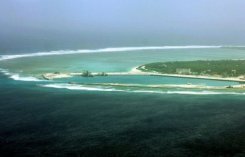 View of the city of Sansha on an island in the disputed Paracel chain, which China now considers part of Hainan province.
China’s newest city might appear to be a tranquil outpost in the South China Sea, but the beaches and palm trees of Sansha are at the heart of a growing territorial dispute.

The so-called "city" is on Yongxing, one of many small islands, reefs and shoals that make up the disputed Paracel Islands spreading over the northern part of the sea.

Beijing claims most of the South China Sea, which is home to vital shipping lanes and possesses varying degrees of proven and estimated oil and gas deposits.

The formation of an administration in Sansha, which will be responsible for China’s interests in the South China Sea is just its latest salvo.

Taiwan and Asean members the Philippines, Vietnam, Brunei and Malaysia all make rival claims on areas of the sea, while the United States is also watching China’s increased assertiveness closely.

A US State Department spokesman said in a statement Friday that Washington was "concerned by the increase in tensions in the South China Sea".

The establishment of an administration in Sansha and a new military garrison there "runs counter to collaborative diplomatic efforts to resolve differences and risk further escalating tensions in the region", he added.

China reacted swiftly. Foreign Ministry spokesman Qin Gang said the US remarks sent "a seriously wrong signal, which is not conducive to the efforts safeguarding the peace and stability of the South China Sea and the Asia Pacific region".

He said the establishment of Sansha was "completely within China’s sovereignty", and called for nations with disputes over territorial claims to stick to friendly negotiations, the state-run Xinhua news agency reported.

Jutting up from lush, green vegetation, a domed colonial-style building is the dominant structure on Yongxing island, a land area of just over two square kilometres.

Adding heft are a mayor, a 45-strong local legislature led by a provincial civil air defence official, a court and, most contentious of all, the new military garrison.

Chinese media reports give varying accounts of how many people live on the island, which is traditionally centred on fishing. But it seems safe to say that the population doesn’t much exceed 1,000.

Inhabitants have access to a bank and a supermarket, photos on the Internet show. There is a library painted in a salmon-coloured hue and a basketball court shaded by palm trees.

Other pictures depict people relaxing in hammocks outside their modest dwellings. There is also a hotel, but there are unlikely to be many visitors yet.

Xinhua said the island has a port and a small military airport. Aerial photos show an airstrip cutting across one end of Yongxing, stretching far out onto reclaimed land.

Improvements are reportedly in store for the islanders in the form of public housing projects and a new hospital complete with a gynaecology and obstetrics department, suggesting an increase in population is expected.

One obscure claim to fame for Sansha, which falls within China’s Hainan province, is that it is simultaneously the country’s biggest and smallest city.

While it’s the tiniest in terms of land area and population, it becomes the biggest when total area under its jurisdiction is taken into account, a whopping 2.6 million square kilometres across the sprawling South China Sea.

That encompasses not only the Paracels, but Macclesfield Bank, a largely sunken atoll to the east, and the Spratly Islands to the south. All are disputed.

China announced the establishment of Sansha, which can be translated roughly as "three sands", with much fanfare in late July. The name derives from the city being supposedly in charge of the three island groups.

"The provincial government will be devoted to turning the city into an important base to safeguard China’s sovereignty and serve marine resource development," Luo Baoyou, the Communist Party head in Hainan province, said in a speech marking Sansha’s establishment.

While the setting appears beautiful, life on the isolated island must certainly have its hardships, among them the typhoons that churn across the South China Sea in summer.

Xinhua reported that a supply ship, the Qiongzhou III, transports staples such as food and medicine from the mainland. It makes two round trips a month — if weather allows — and can carry as many as 200 passengers.

As for unwanted visitors, even they can expect accommodation.

China’s Global Times newspaper reported that a detention facility is under construction to eliminate the "headache" of there being no place to put foreign fishermen who infringe China’s waters.

Next news: China is ready to work with ASEAN countries- Qin Gang