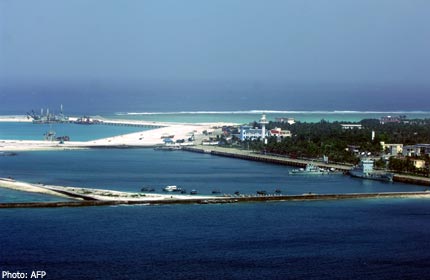 This aerial view of the city of Sansha on an island in the disputed Paracel chain.
The failure of Asean to reach a consensus over the South China Sea disputes dealt a "severe blow" to the regional bloc’s credibility, said Emeritus Senior Minister Goh Chok Tong yesterday.

At a meeting of the region’s foreign ministers in Phnom Penh last month, member states failed to agree on a joint closing statement for the first time in the organisation’s 45-year history after the chair, Cambodia, stonewalled attempts to include references to recent disputes in the potentially oil-rich South China Sea.

Although an agreement was reached a week later, Mr Goh observed that the episode damaged the association in the eyes of observers.

"Our dialogue partners and investors must surely be watching and re-calculating their interests and positions. We cannot blame them for this.

"It is, therefore, imperative that we address their concerns and demonstrate that we are capable of reaching a consensus on even the most sensitive of issues," he said during the 5th Asean and Asia Forum, held at the Fullerton Hotel.

China claims almost all of the sea as its sovereign territory. Taiwan has its eye on the area as well. Furthermore, Vietnam, the Philippines, Malaysia and Brunei have overlapping claims there.

Parts of the area in dispute include the Scarborough Shoal, the Spratly Islands and the Paracel Islands.

The complexity of the claims has led to major differences in opinion on the maritime row among Asean members.

These fissures came to light at last month’s Asean ministerial meeting, particularly between Cambodia, and claimant states Vietnam and the Philippines.

Cambodia, a close ally of China, has been accused of deliberately resisting an agreement that would not be in China’s interest.

Noting that the sea disputes have now become a key signal of Asean’s broader unity, Mr Goh urged Asean nations to put the region’s interests before the disputes.

"The South China Sea will remain a test case of Asean’s ability to forge a consensus on difficult problems and act in the region’s broader interests.

"It thus has a broader significance for the region beyond the immediate disputes which are, of course, for the claimant states to settle among themselves."

In his speech, Mr Goh also addressed the progress of economic integration in the Asean region. Asean leaders seek to establish an Asean Economic Community by 2015, which will eventually allow Asean to become a "single production base" that will "allow companies to operate seamlessly throughout the region", he told the audience of about 300.

Among the businessmen, academics and diplomats attending was Brunei High Commissioner Abdul Ghafar Ismail, who said he was still "very optimistic" about the prospects for Asean integration.

"We don’t have an alternative," he said. "I’m proud to say we have moved quite a lot and we have made important steps towards integration of the region."