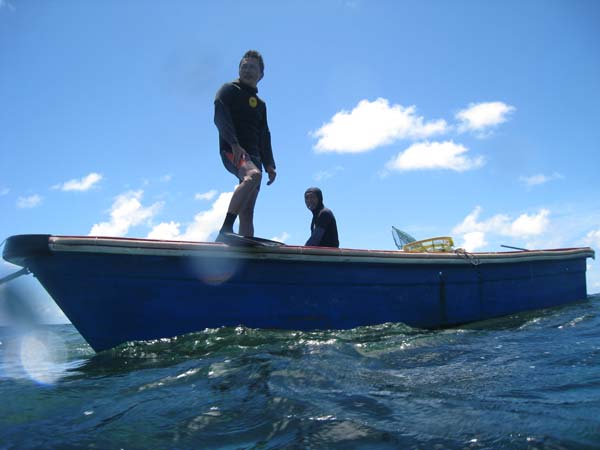 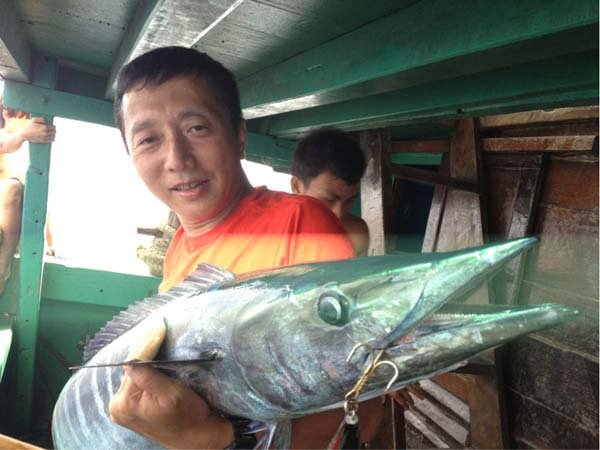 Chen holds a mackerel he caught by trolling in Xisha waters.
A former finance officer has made it his responsibility to conserve the environment of Xisha Islands. Liu Zhihua reports in Beijing.

Chen Xu is excited that the Xisha Islands are now part of a new city called Sansha in the southernmost province of Hainan. "Because that means it is now possible to raise the issue of environmental protection of the islands with the local government and to get their support," says the 44-year-old finance officer-turned-environmentalist. "I love the sea and the islands, and will do my best to protect them." He says he found his calling after a chance visit to Yongxing Island and Zhaoshu Island of Xisha Islands, in 2007. He says it was the most beautiful place he has ever seen. The natural environment took his breath away and he decided to move there.

"The water is so clear. I was told it’s even clearer than the Maldives," Chen says. "Apart from a few fishermen, Zhaoshu Island is tranquil, with charming beaches, trees, birds and sky. I felt peace immediately."

Chen visited the islands at the lowest point in his life. Although he was doing well as a senior client representative of a securities company in Sichuan’s provincial capital Chengdu, he was bored and depressed.

"I used to feel depressed every Monday, as I headed to the office. I felt stuck in a routine life and wanted to find a way out," Chen says.

The islands provided the answer. With the help of locals, Chen built a 20-square-meter wooden hut on Zhaoshu Island.

Like the other huts on the 190,000-square-meter island, the hut was minimally furnished. Even so, Chen says, life was "as sweet as in paradise".

He woke up without an alarm clock and spent his day fishing, diving and cooking his catch. At night, he went to bed lullabied by nature’s music – the sounds of waves, birds, animals, insects and trees.

He has taken many photos of reefs, corals, fish and conches, among others.

To share his newfound happiness, Chen once posted a photo of himself holding a branch of coral on his micro blog. He was surprised when a friend in Australia commented that what he did was detrimental to the environment and that if he were in Australia, he would have been punished by law.

"I was shocked. I didn’t want to be a bad guy. After that incident, I became more aware of the environment."

Chen began noticing that fishermen from nearby islands were threatening Zhaoshu Island’s surroundings.

The fishermen usually come to the island shortly after Spring Festival in February, and leave before the typhoon season, which begins in August.

"When they are on Zhaoshu Island, they fell trees to make firewood, and as time passes, the trees reduce in number and this causes a drop in the bird population.

"The fishermen also bring with them cats to catch mice on the island. The number of cats have multiplied, and when they can’t find enough mice, the hungry wildcats start attacking the birds," Chen explains.

"I was no longer living in paradise. Instead, I began seeing environmental problems and felt a strong urge to solve them," Chen adds.

He says one feels more connected to nature on an island because of proximity and therefore, the desire to protect it. But in cities, where one is surrounded by the concrete jungle, the connection with nature is remote.

Chen started talking to fishermen trying to convince them to fish less, or at least fish farther from the shore.

He achieved some success with some fishermen adopting trolling. But there were many who won’t listen.

Realizing that he could not achieve much alone, he left the island and moved to Haikou, Hainan’s provincial capital in August 2011.

In the meantime, he takes every chance to lobby with the relevant authorities. The establishment of Sansha city, Chen says, has provided a possible avenue.

He says he has started calling on the new city authorities, to show them his research conclusions, and persuade them to take effective measures to protect the sea and islands from being overly exploited.

Li Ming, an official of the Education, Culture and Public Health Bureau of the newly established Sansha City government, has come to know Chen because of his appeal for the protection of the islands.

"Environmental protection will be a focus of our policy for the islands. In fact, we have already started making plans," Li says.

Next news: China Pharma in Haikou to announce its 2nd quarter of 2012 financial results