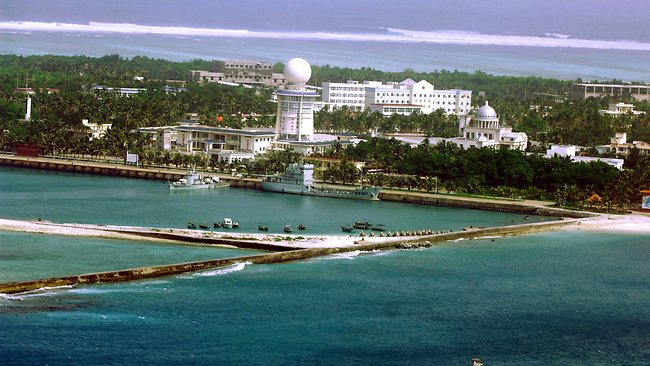 The State Council, or China’s cabinet, approved the establishment of Sansha, a prefectural-level city in south China’s Hainan province, to administer the Xisha, Zhongsha and Nansha islands and their surrounding waters in the South China Sea on June 21.
China has heightened tensions in the South China Sea with its new, remote island city and planned military garrison in a contested area viewed as a potential flashpoint for conflict in the Asia-Pacific.
How might the United States respond?
Criticise Beijing too strongly and the Obama Administration will strain its relationship with the emerging superpower. Let it pass and undermine two years of intense diplomacy that has promoted the US standing among Southeast Asian nations that are intimidated by China’s rise.
A key plank of the Administration’s engagement in the Asia-Pacific since 2010 has been its declaration of a US national interest in the maintenance of peace and stability in the South China Sea, where China and five of its neighbours – most notably the Philippines and Vietnam – have competing territorial claims.
But tensions have only escalated. China’s raising of the flag last week at Sansha municipality on tiny Yongxing Island, 350km from its southernmost province of Hainan, come as claimants jockey for influence in the resource-rich region.
China will not be able to project much military power from such a small outpost – with a population of just 1000 people and scarcely room for an airstrip – but it has symbolic importance.
Beijing says the municipality will administer hundreds of thousands of square kilometres of water where it wants to strengthen its control over disputed and potentially oil-rich islands.
In Washington, Republican Senator John McCain called the move provocative and reinforced worries that China would attempt to impose its territorial claims through intimidation and coercion. Democratic Senator Jim Webb said China’s attempt to assert control of disputed territories may be a violation of international law.
While the State Department was careful in its commentary, it also criticised China’s "unilateral moves".
"I think there is a concern here, that they are beginning to take actions when we want to see all of these issues resolved at the table," spokeswoman Victoria Nuland said.
President Barack Obama will not want to appear soft on China as he fights for re-election against Republican contender Mitt Romney, who has accused him of being weak on Beijing and has vowed to get tough, in particular, on China’s trading practices.
However, the US walks a fine line in its diplomacy on the South China Sea, always stressing it does not take a position on the competing sovereignty claims.
Defining it as a US national interest in 2010 helped galvanise Washington’s standing in the region and revive its ties with treaty ally Manila and build a relationship with former enemy Hanoi. As part of its broader push, or "pivot," toward Asia, the US elevated its engagement with the Association of Southeast Asian Nations, or Asean, and strongly supports the 10-nation bloc’s efforts to negotiate collectively with China on the issue and draft a code of conduct to help manage South China Sea disputes.
That’s annoyed China, which claims virtually the entire South China Sea and its island groups and would prefer to negotiate with the other claimants individually. Beijing also views US intervention on the issue as encouraging Vietnam and the Philippines to be more confrontational in asserting their own claims.
When Chinese fishing boats were stopped by Philippine vessels at the disputed Scarborough Shoal in April, inside what Manila regards as its exclusive economic zone, it deployed a navy ship supplied by the US the previous year prompting China to send more vessels of its own, escalating a stand-off.
The establishment of Sansha municipality follows Vietnam’s passing a law in June stating its jurisdiction over the Paracel and Spratly Island chains and declaring that all foreign naval ships entering these areas must notify Vietnamese authorities.
SOURCE: nzherald.co.nz
Editorial Message
This site contains materials from other clearly stated media sources for the purpose of discussion stimulation and content enrichment among our members only.
whatsonsanya.com does not necessarily endorse their views or the accuracy of their content. For copyright infringement issues please contact editor@whatsonsanya.com

Next news: Sansha City to build 83 low-rent apartments for its residents