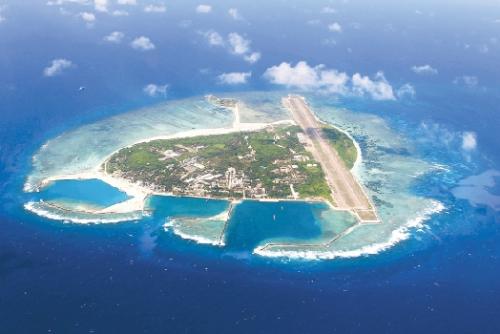 The Defense Ministry on July 26 said the chiefs of the Sansha Garrison have been appointed, and the establishment of related bodies on China's territory "has nothing to do with other countries".

China on July 24 established the city of Sansha on Yongxing Island in the southernmost province of Hainan, and a military garrison was also established during the same day in the city.

Yet China's recent steps to beef up ensuring lawful maritime rights in the South China Sea has given rise to both domestic praise and criticisms from overseas.

US State Department spokesperson Victoria Nuland on July 24 expressed Washington's "concern" over China's establishment of Sansha City, and she questioned whether there should be "any unilateral moves of this kind".

"Our country's establishing corresponding organs on our own territory has nothing to do with other countries," Yang told reporters after the news conference.

As for whether to deploy an operational combat unit under the Sansha Garrison, the spokesman said it is "decided by the missions and responsibilities" of relevant military organs.

Media reports said the Sansha Garrison "was previously the Xisha Maritime Garrison", a one-service garrison, and the establishment of Sansha Garrison "will be followed by troops from all the three services", including the navy and air forces, stationed in the area.

"These are two different military organs, and they conduct training and operations in accordance with their own responsibilities," Yang said in response.

The State Council in June approved the establishment of Sansha, a prefecture-level city in Hainan province, and the first Sansha government will be devoted to administrative management, economic development, people's livelihoods and environmental protection in the coming five years.