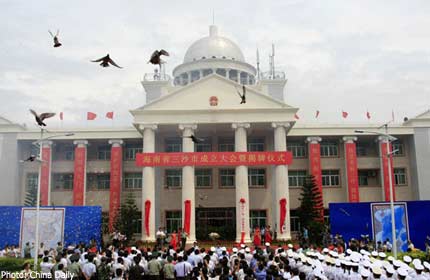 China on Tuesday established the city of Sansha on Yongxing Island in the southernmost province of Hainan.

Sun Shaochi, vice-minister of civil affairs, announced the State Council’s approval of the establishment of the city at a ceremony.

Luo Baoming, Party chief of Hainan province, said in a keynote speech that Sansha was established to administer the Xisha, Zhongsha and Nansha islands and their surrounding waters in the South China Sea.

"The provincial government will be devoted to turning the city into an important base to safeguard China’s sovereignty and serve marine resource development," he said.

He said the main task now is to build up political power in Sansha to ensure efficient administration.

A ceremony to mark the city’s establishment began on Tuesday morning in a square in front of the city government’s main building, located on Yongxing Island, a part of the Xisha Islands and the largest island in the area.

The national flag was hoisted while the national anthem played after the signboards of the Sansha city’s government and the city’s committee of the Communist Party of China were unveiled.

A military garrison was also established on Tuesday in the city.

Xiao Jie was elected on Monday the first mayor of the newly established city in the first session of the Sansha People’s Congress held on Yongxing Island.

Xiao, 51, was head of the Hainan Provincial Agriculture Department.

"It’s a great honor to be the first mayor of Sansha, and it’s also a brand new mission, challenge and test for me," said Xiao.

The deputies to the legislative body should make positive contributions to the management, development and protection of the islands as well as the sea waters surrounding Xisha, Zhongsha and Nansha, said Fu.

Forty-five deputies to the Sansha People’s Congress attended the session and cast their votes. The deputies were elected by about 1,100 residents from the Xisha, Nansha and Zhongsha islands on Saturday.

The State Council in June approved the establishment of Sansha, a prefecture-level city in Hainan province.

SOURCE: asiaone.com
Editorial Message
This site contains materials from other clearly stated media sources for the purpose of discussion stimulation and content enrichment among our members only.
whatsonsanya.com does not necessarily endorse their views or the accuracy of their content. For copyright infringement issues please contact editor@whatsonsanya.com