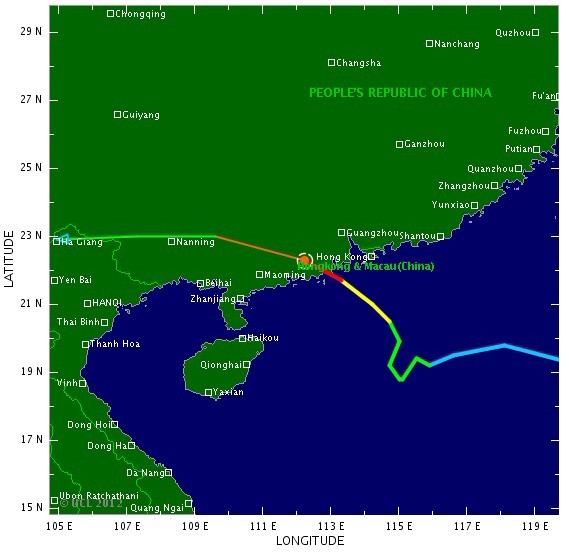 The typhoon had a maximum wind velocity of 144 kilometers per hour near its center when it landed and brought torrential rains along the Pearl River and to the eastern Guangdong.

Vicente is forecast to move to northwest at first at about 20 kilometers per hour toward the region to the west of the Pearl River Estuary. It will move west-northwestwards later.

Heavy rains and thunderstorms started to hit Hainan and Guangdong provinces, as well as the Guangxi Zhuang autonomous region, yesterday morning. Central and eastern Guangdong were whipped by strong gales of 80 kilometers per hour.

As winds from Typhoon Vicente battered Hong Kong, the Hong Kong Observatory raised Tropical Cyclone warning to the highest level of Hurricane Signal No. 10 at 00:45am today.

Hurricane Signal No. 10 means that winds with mean speeds of 118 kilometers per hour or more are expected, the Observatory said in a statement.

Vicente is expected to be closest to Hong Kong in the next few hours, passing within 100 kilometers of the Hong Kong Observatory. The eyewall of Vicente will come near to the southwestern part of Hong Kong, bringing hurricane force winds to those areas.

All Hong Kong residents are advised not to go outside, and remain where they are if protected and be prepared for destructive winds.

Next news: Winner of Miss Hainan Tan Qiaoyi not upset with ruthless rumors