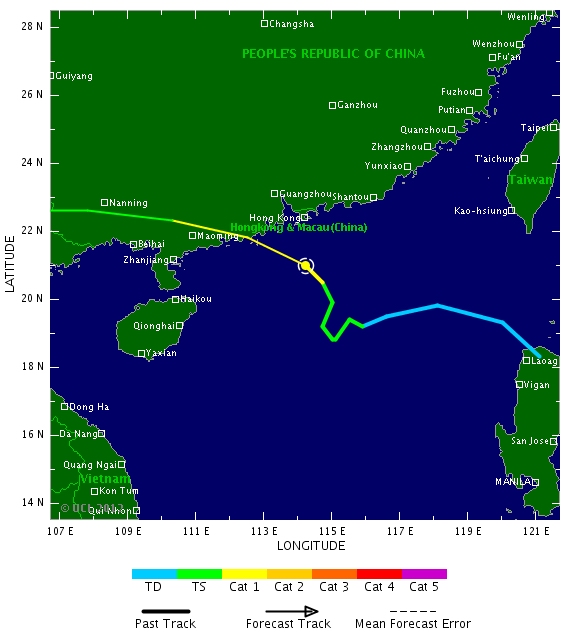 Forecast and post track of Vicente as of 3:00am Beijing Time on 24th July
Hong Kong raised its highest tropical cyclone warning on Tuesday as an intensifying severe typhoon edged closer towards the financial hub, grounding flights and forcing the port to close.

Financial markets, schools, businesses and non-essential government services close when any No. 8 or above signal is hoisted, posing a disruption to business in the capitalist hub and former British colony that returned to Chinese rule in 1997.

The Hong Kong observatory said it expected the No. 10 signal to remain in force overnight, meaning markets could be shut down in the morning.

Earlier in the afternoon, the brewing cyclone shuttered schools and port operations and sent office workers home amid torrential rain, many rushing to board buses, trains and ferries before a partial transport network shutdown.

The Hong Kong Observatory raised the No. 10 signal early on Tuesday as typhoon Vicente swept much closer to Hong Kong than initially thought, making this one of the strongest typhoons to hit the city in recent years.

Should the signal remain in force after 7 a.m. on Tuesday, the Hong Kong stock exchange will remain closed for at least part of the day after it dived 3 percent on Monday.

In southern China, more than 33,500 Chinese fishing boats have been alerted to return to harbour with 10,560 fishermen taking shelter ashore in Guangdong, Chinese state media reported, while storm surge and sea wave warnings were heightened with winds of up to 100 kph expected.

SOURCE: euronews.com
Editorial Message
This site contains materials from other clearly stated media sources for the purpose of discussion stimulation and content enrichment among our members only.
whatsonsanya.com does not necessarily endorse their views or the accuracy of their content. For copyright infringement issues please contact editor@whatsonsanya.com